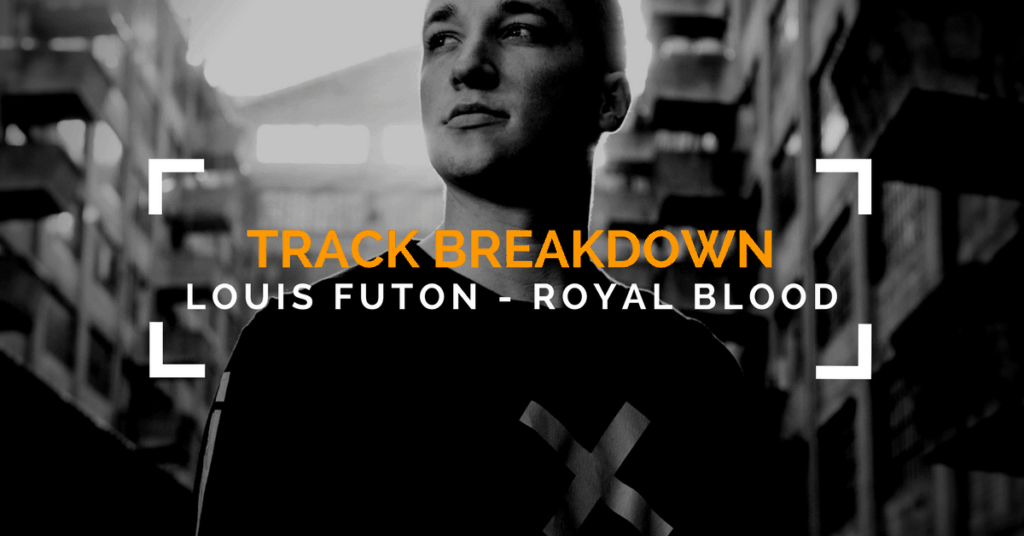 Welcome to the ninth installment of our article series, Track Breakdowns.

Louis Futon has established his career with a range of jazz/funk influenced originals and remixes. Royal Blood is no different, as he beautifully blends together upbeat synth lines, smooth vocals, and a heavy groove.

In this breakdown, I’ll teach you three foolproof ways to add jazz color and tone to your chord progressions.

I’ll show you examples of these techniques used in this song, offering advice on how to implement them into your own music.

Trust me, these are simple techniques that anyone with just a little music theory knowledge can learn. Whether you’re writing dance music, R&B, or hip-hop, you’ll be sure to take away heaps from this article.

Royal Blood is in the key of Ab Major.

Below is a transcription of the verse chord progression:

Below is this same progression in root position with the rhythm removed.

This progression sets the foundation for the entire track. It’s present in both the verses and pre-choruses.  The chorus and bridge build off of it, but all share a similar chord structure and movement.

Let’s look at why this progression works, what makes it “jazzy”, and how you can spice up your own progressions.

These names might sound complex, but the techniques aren’t.

If you played Royal Blood to someone with zero music theory knowledge and asked them to describe it, it’s likely that “jazzy” would pop up as a description.

Even though they have no idea what a seventh chord is, they could still hear the jazz influence.

The types of the chords used in Royal Blood are similar to those used in jazz.

These are extended chords.

Extended Chords – These are chords that extend beyond a three note triad. This includes sevenths, ninths, elevenths, and thirteenths.

Extended chords are a fundamental part of the jazz sound. They add an extra element of color and tension to chord progressions.

If you aren’t too familiar with extended chords, you can check out this article.

Let’s look back at the verse progression, and see what types of chords Louis Futon is using.

Essentially every chord but the first uses an extension.

Remember, it’s these extensions that add color to the chords, giving them their “jazz” sound.

In other words, the simplest way to make your progression sound more jazzy is to add extensions to your chords, in particular sevenths and ninths.

There are a few ways to approach this: using theory or using your ear.

A. Figure out the seventh/ninth chords diatonic to your scale.

In other words, figure out what seventh/ninth chords naturally occur in the key.

There is a pattern for this in major/minor keys, which you can learn  about here.

When writing, you can simply refer to this chart to figure out what types of seventh chord exists in that key.

For example, if you’re in F Minor, you know that the 3 chord is major (Ab major), but it also could be a major seventh (Ab major seventh).

B. Use your ear to add extensions.

The second way is to use your ear to add more notes to a chord.

This is a bit of a “spray and pray” approach, but it can be equally if not more effective than the previous one.

The execution is simple: build a basic triad, then try adding additional notes to the chord.

You could add extensions above the chord like sevenths and ninths, or within the chord itself, such as seconds and sixths.

One of the reasons this technique works is you’ll often be drawn to notes outside the scale, which is perfectly acceptable. The focus is to add harmonic texture and color to your basic major/minor triads.

To make a progression sound jazzier, you don’t have to make every chord an extended chord. Be careful about adding too many extensions.

I’ve seen a lot of producers learn about extended chords for the first time, then go way overboard adding ninths and elevenths to every chord in a progression. That’s a bit too much.

Try your best to find a balance between using triads and different types of extended chords.

For example, the five chords used in the verse of Royal Blood are all different: there is a major chord, a minor seventh, a minor ninth, a major ninth, and a major sixth. This creates balance and development that makes this progression memorable and exciting.

Let’s summarize what we’ve looked at so far:

Beyond extended chords, if you were to ask me for a simple jazzy chord progression technique, I would tell you to learn about secondary dominants.

The sound of a secondary dominant chord is unmistakable. It’s commonplace in jazz and funk, and is used readily by artists such as Lido, Medasin, and Flume.

First, let’s talk about what a secondary dominant chord sounds like.

The second chord (C7) of the verse in Royal Blood is a secondary dominant.

How would you describe this chord?

It’s quite tense, but the resolution is extremely strong.

Without diving too much into the theory behind them, here’s a short hand explanation of secondary dominants:

Let’s look at an example.

I have a chord progression in C Major that goes C – Am – G. I want a chord between Am and G, so I’ll use the secondary dominant of G, which is D7 (since D is a perfect fifth above G). The progression then becomes C – Am – D7 – G.

The first progression sounds fine. The movement to the G chord is smooth, without any real sense of urgency.

But in the second progression that G chord sounds like it’s all we’ve ever wanted in life, and when we finally land on it we are as happy as could be.

Another way to look at secondary dominants is that they are a more exciting way to get from point A to point B. They’re a momentary detour that’s puts you right back where you want to be.

Let’s look at another example.

Often times, I’ll use secondary dominants in a chord progression the second time it loops around. This helps add interest and development to the track.

I’ll normally substitute it for the third chord, or add in just before the last chord.

Let’s look at a quick example.

To spice things up, I want to substitute the third chord (F#m) with a secondary dominant. Since the following chord is an A major chord, I’ll need the secondary dominant of A. E is a perfect fifth above A, so I can use an E dominant seventh chord, or E7.

Take a listen below:

Let’s jump into the chorus of Royal Blood.

Below is a transcription of the chorus chord progression, played by the synth chords.

This progression is nearly identical to the verse progression. The rhythm is switched up, and there is one new chord added, which I’ve highlighted above.

This E7#9 chord isn’t in the key of Ab major, so where does it come from?

There’re a few ways we can look at this.

First, we can think of it as the link between Fm7 and Eb7#9.

F and Eb are two semitones apart, separated by E.

You can think of this chord movement as “walking down the scale”, playing a F chord, an E chord, then an Eb chord.

So although E isn’t in the key of F minor, it makes sense in context, acting as a passing chord between F and Eb.

How can you use this information?

If you have two chords in a progression that are two semitones apart, you can move chromatically by inserting a chord rooted by the note in between them.

You’ll normally want to make this new chord a passing chord, i.e. you won’t want to hang out on it for too long.

We can also approach E7#9 with a concept called tritone substitution.

The simplest way to think about tritone substitution is it’s when a dominant seventh chord resolves to a chord a half step below it.

This is a classic jazz chord substitution, and it sounds really great.

Example: A7 to Ab

That’s exactly what’s happening in Royal Blood. We’re moving from a dominant seventh chord (in this case we also have a ninth) to a chord a half step below it.

You don’t need to understand why this works (click here if you’re curious), all you need to know is how to set it up.

The setup will be quite similar to the one discussed in the secondary dominants section (these techniques are related).

Let’s use our same C Major chord progression from earlier:  C – Am – G. I want a chord between Am and G, so I’ll pick the dominant seventh chord that’s a half step above G, which is G#/Ab7. The progression then becomes C – Am – G#/Ab7 – G.

And that’s it. Although the name sounds fancy, tritone substitution is really easy to set up. Figuring out where you’re going, then place the dominant seventh chord a half step up before it.

Here is a quick recap of what we’ve covered: