How to Produce Music Like Flume – Breaking Down “Say It” 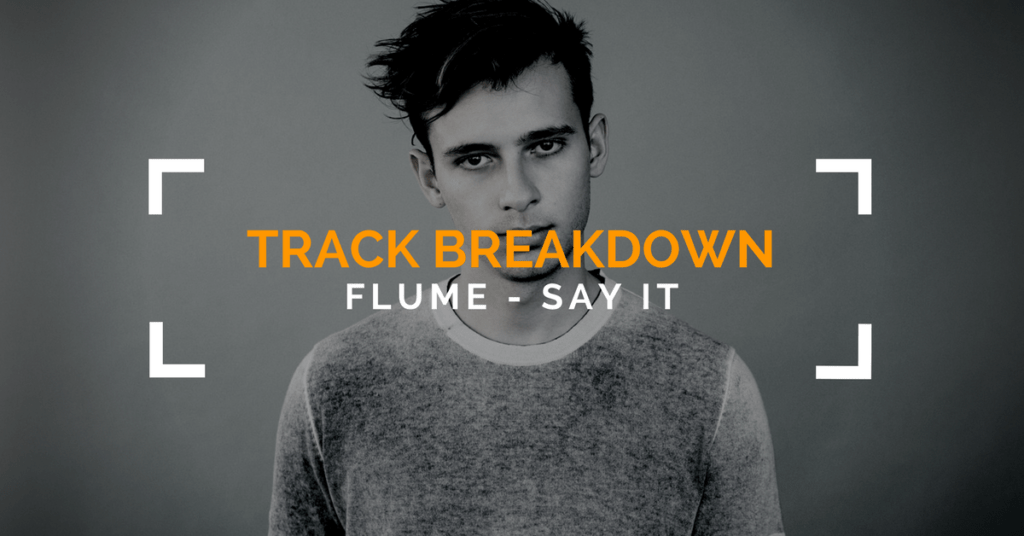 Welcome to the sixth installment of our article series, Track Breakdowns.

In this series, we break down the music theory and arrangement behind popular songs, ultimately showing you what makes each song work.

In this breakdown, we’ll be looking at Say It by Flume, the fifth track off his Grammy award winning album Skin.

Below is the main verse chord progression (starts at 0:02).

Now, let’s look at how Flume is able to take this chord progression and weave it through the rest of the track.

Let’s begin by breaking down what makes this chord progression work.

This progression is relatively straightforward. All of the chords are diatonic to the key of D# minor, and they are all triads (three note chords).

This progression starts and ends on the one chord.

Why does this technique work?

Remember, the one chord is your home base. It sets both the melodic and emotional foundation of a track.

You can think of chord progressions as an elaborate way to get back to the one chord. How you choose to get there is what defines the emotional quality of your song.

It’s that one chord that provides resolution, resolution from the tension created by other chords in the song.

To show you how important the one chord is, let’s look at an example.

Which one of these two progressions makes you feel more comfortable?

Here’s what they are playing:

Progression 1 sounds better because it resolves. Progression 2 leaves you hanging, since you expect it to go somewhere else.

If I looped Progression 2, it would resolve every time it loops since it begins on C, which in this case is the “home” (i.e. one) chord.

This is fairly typical in popular music, where the resolution doesn’t occur until the chord progression plays again.

By starting and ending on the one chord, we’re not left waiting for the progression to loop and resolve.

Instead, it resolves within the progression itself.

Now, what can you take away from this technique?

Don’t be afraid to go back to the one chord at the end of a progression.

What’s important to note about the verse progression in Say It is Flume strays away from the one chord for a “relatively” long amount of time. He starts with the one, then goes further and further away from it, eventually resolving back to it.

By the time the iv chord hits, the listener wants nothing more then to go home.

On the other side, you don’t want to go back to the one chord too soon. You want to create just the right amount of tension before you resolve it.

After the verse chord progression plays through once, Flume changes it slightly the second time around. Let’s listen to these played one after the other.

Even though the chords sound different, they’re actually the same exact chords. The only difference is how they are voiced.

As you can see above, bars 3-4 and 7-8 are playing the same exact chords, but the way the notes are played is different.

So although these chords may sound different, they’re in reality the exact same.

This achieves the effect of making the second half of the progression sound new, but familiar.

All of this is a fancy way of saying Flume duplicated the progression and transposed some of the notes up/down. In reality that’s all that’s going on.

Again, the purpose behind this change is to add subtle interest and variation to keep the listener engaged.

(If you want to learn more about chord voicing, check out my Madeon breakdown)

3. Transitioning from the Verse to the Pre-Chorus

Lately, I’ve had a lot of producers asking me this question: How do you effectively change progressions in a song?

In other words, how do you transition between two chord progression in a way that actually makes sense?

To answer this question, let’s look at how Flume is able to do this in Say It.

Below is the main pre-chorus progression (starts at 0:29):

To focus in on this transition, let’s listen to the verse as it moves into the pre-chorus:

Even though they are two distinct progressions, they work extremely well together.

Now back to the original question: How do you effectively change progressions in a song?

Beyond “switching things up”, you need to ask yourself what purpose the new progression serves, and how does the progression relate back to the initial idea.

Here are a few examples of this:

Understanding this will make the writing process considerably easier.

Now this all sounds good in theory, but how does is look in action?

Let’s look back at the the verse/pre-chorus transition in Say It:

Here is why this transition works:

Let’s turn these around into practical strategies you can apply to your songwriting.

In order to effectively change chord progressions in a song, keep the following in mind:

4. Transitioning from the Pre-Chorus to the Chorus

After the pre-chorus, Say It moves into the chorus.

Below is the main chorus progression:

(Verse in is green, chorus is in blue)

The main difference is timing. The first (D#m) and fourth (F#) chords are both delayed by a quarter note.

Otherwise, there are small variations to the voicing of the chords. Nevertheless, the chords used are the exact same.

This makes it so when the chorus hits it feels new, yet familiar. It sounds like you’ve heard these chords before because you have, just in a slightly different form.

From a sonic perspective, the chords in the verse are heavily low-passed, as opposed to in the chorus where they are bright and open. So even though the listener “heard” the chords in the verse, they didn’t hear them in full force. This adds to the distinction between both sections, all the while further linking them together.

Flume doesn’t initially repeat his pre-chorus progression. Instead, he makes adds a few changes the second time it plays through.

Let’s listen to the pre-chorus in its entirety. I’ve highlighted the chord changes below:

There are three changes: the second, fourth, and fifth chords are all different.

Let’s focus in on the second chord.

The second time through, Flume substitutes the G#m6 with an A#7.

This A#7 chord is what’s called a secondary dominant chord. It’s an extremely popular technique used in jazz, rock, folk, pop and more.

Circling back, the A#7 chord mentioned above is a secondary dominant chord because it is a perfect fifth above the chord that follows it (D#m).

There are two ways I utilize secondary dominants in my songwriting.

Not too long ago I was helping a student with a track of his.

He told me that he was struggling to make an interesting and unique second chorus (sound familiar?).

My response: What was wrong with the first chorus?

He said that there was nothing wrong with it, so I asked him why did he felt compelled to switch up the second chorus.

He didn’t have a good response to this. He said that’s what a lot of other songs do, so he thought he should too.

If a section of your song is really good, the listener will want to hear it again. Don’t switch up the verse or chorus just because you think you are supposed to.

If the chorus of your song is memorable and catchy, give it to the listener again. Similarly, if your opening chord progression is great, don’t be afraid to use it throughout the entire song.

The reason I’m pointing this out is that throughout this article I’ve discussed the importance of adding subtle but significant changes to a track. However, it’s essential to make these decisions in context.

Here are a few examples of what is meant by in context:

It’s important to trust your creative instinct. However, it’s just as important to be able to step back and understand how your decisions affect the growth of a track.

Lastly, let’s look at the bridge of Say It. First, have a listen to the original:

Below is a transcription of the bridge chord progression

Essentially, Flume is just bouncing back and forth between D#m and C#.

Towards the end, he starts playing with the voicing of D#m, then adds a C#/F to help signal that a change is coming.

Overall, this progression is fairly simple, but it works well to bring down the energy of the track.

To summarize: Alternating between chords can be used to build tension in an intro, pre-chorus, or bridge.

I hope you were able to take away some useful tips from this article. Learning proper songwriting is a difficult process, so I want to help make the journey as easy as possible for you.

I tried to pull out as much valuable information as I could from this song, helping you to better understand what makes a great song, well, great.

There’s a good amount of information to digest here, so I’d recommend re-reading it a few times to soak up all the different elements.

The point isn’t to memorize everything in this article, but to let this article guide your workflow, adding additional tools to your music-writing arsenal.

Disclaimer: Technically, in the key of D# minor the second note is E#, not F. For simplicity’s sake I’ve left it as F in this article.