The Theory & Arrangement Behind Portugal. The Man’s “Feel It Still (Medasin Remix)” 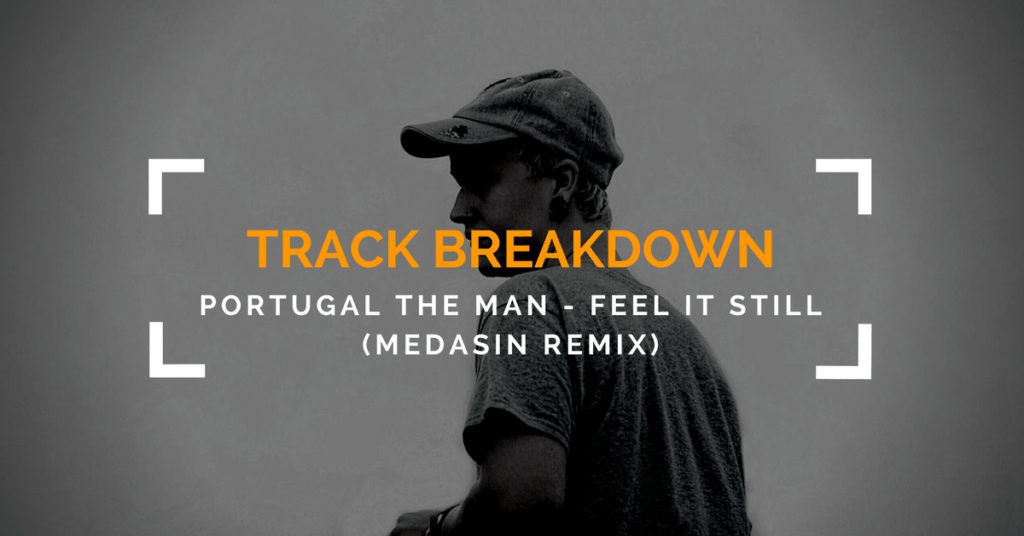 Welcome to the eighth installment of our article series, Track Breakdowns.

In this breakdown, we’ll be looking at Medasin’s remix to Portugal The Man’s “Feel It Still”.

If you’re wondering how to write soulful, RnB inspired chord progressions, you’ll take away heaps from this article.

Let’s breakdown how Medasin built up this incredible remix.

This track is in the key of E major.

Below is the intro chord progression:

To simply, let’s look at this progression in root position:

This progression may seem complicated, but I’ll break it down piece by piece, making sure you understand what’s going on.

Right now, the only thing I want you to pay attention to are the first two chords: Emaj9 and F#m11.

The second half of this progression is similar to the first half, only with a few slight adjustments.

For now, think about this progression as just two chords, Emaj9 and F#m11.

Keeping this in mind, let’s dive into the breakdown.

1. How to Write a Two Chord Progression That Works

The entirety of this song is based around just two chords.

Why would Medasin do this, and how does he make it work?

First off, a two-chord chord progression don’t offer a lot of movement, but that isn’t necessarily a bad thing.

A smooth two chord progression can lay the foundation for a more complex and active song.

For example, a track with active melodic and percussive elements could be balanced out by a static two chord progression.

Sam Gellaitry’s track “Shake” is a great example of this.

In other words, there is a context in which a two-chord progression makes sense.

Let’s dive deeper into the second question, looking at how Medasin makes this progression work.

The first reason this progression works is that the chords themselves are interesting.

An entire song that bounces between E and F#m triads probably wouldn’t be too exciting.

The first chord is Emaj9, and the second is F#m11.

Because these are extended chords, they are sonically denser than three-note triads.

Even looking at the MIDI, you can tell that these are going to be rich, dense chords.

The other side of these chords is their emotional quality.

The emotional quality of extended chords is generally richer than that of triads.

This means that although there are only two chords, each of them has a rich and complex emotional texture. Thus, the listener is not disappointed hearing them played back and forth.

Lastly, extended chords are commonly used in jazz and funk. This contributes to the smooth, RnB feel of the track.

What can you take away from this?

Let’s look back at the simplified version of the intro progression.

Another way Medasin adds character to this progression is by changing the bass notes of the chords.

He alternates between using F# and B in the bass of the F#m11.

This technique works because the two chords sound different, when in reality they’re the exact same chord (only with different bass notes).

Main Takeaway: To add subtle development to a progression, alternate the bass notes used for a chord.

(You can learn more about slash chords in my Kaytranada Track Breakdown.)

The third way Medasin adds interest to this progression is with a passing chord.

Passing Chord: A passing chord is a nondiatonic chord that connects, or passes between, the notes of two diatonic chords (via the wikiwiki)

Passing chords are a more interesting way to get from point A to point B.

They’re especially useful the when progression loops, where the listener is expecting the same transition but is taken on a momentary detour.

The fourth chord in this progression is a passing chord. It’s a Fm7b5, otherwise known as F half-diminished.

(Technically there should be an add(m2) to include the F#, but this isn’t too important right now)

Instead of going straight from the Emaj9 to the F#m11, Medasin makes a momentary detour with the Fm7b5. This subtle variation effectively extends the progression. It feels like a distinct 4 bar loop, when in reality it’s just the same 2 bars with a passing chord.

For example, if you’re moving from a C chord to a D chord, you could use a C# chord as a chromatic passing chord.

The quality of the chords you use will depend on the key you are in and the chords you start and end on. When trying this out, trust your ear to find a chord that fits.

Main Takeaway: Add variation to a chord progression by introducing passing chords. If you’re moving up or down a whole step, you can use a chromatic passing chord to step between the two chords.

2. How to Rephrase a Two Chord Progression for an Entire Song

Medasin builds off of the intro chord progression but never abandons it completely. Throughout the entire song, some iteration of this progression is always present.

Medasin “rephrases” the progression, disguising it to make it sound new, but familiar.

In fact, this progression is played in seven different forms before the track hits the 1:20 mark.

(Note: I did quick remake of each sound, helping make it easier for you to pick out each progression in the original.)

The two ways he disguises this progression is thourgh changing the rhythm and timing of the chords and changing the sound used to play it.

As mentioned above, all of these progressions are built off the same initial chord movement. They all play some type of Emaj9 – F#m11.

The first way they are “disguised” is with a different rhythmic pattern.

For example, here a transcription of one of the verse chord progressions (labeled Chords 2):

Compare this to the intro progression:

If you look closely, both progressions are playing the exact same chords, only the verse is playing fewer chords. It’s more spacious, and acts more as an accent.

There are actually three different progressions in the verse.

I showed you the first progression (labeled Chords 2) in the last section.

Again, all three progressions are outlining the two-chord progression established in the intro. They’re distinct because they are different progressions played by different instruments, but the core foundation of these chords is the exact same.

The result is a cohesive development that sounds new, but familiar.

To hear the interplay between these progressions, here is a quick remake of the verse of this track. Listen for how the plucks bounce off of each other, while the Rhodes lays a smooth foundation below.

As I explained above, seven different versions of this progression are present in the track. By adjusting the rhythm of the progressions and the instruments used, Medasin is able to develop the song in a smooth, natural manner.

Main Takeaway: Create cohesive development by rephrasing the initial melodic idea. Add small but meaningful changes to the rhythm and voicing of the progression, and change the instrument used to play it.

3. How to Craft a Remix That Stands Out

I want to wrap things up by touching upon not just why this track works, but why it works as a remix.

I know many of you reading this regularly producing remixes, so I’d like to share my thoughts on why this remix works so well.

A. It uses a chord structure different from the original

One of the easiest ways to gain the attention of an artist you’re remixing is to reharmonize the original vocal melody (i.e. use a different chord progression)

Doing this shows you invested time into reinterpreting their song, showing them where you would take the main hook.

For example, the original version of Feel It Still is in C#m, but Medasin never uses a C#m chord. This helps create a melodic distinction between the original and the remix.

B. It took the original somewhere new

I see far too many remixes that take the original and inject into it whatever style is popular at the time (trap, dubstep, future bass, etc..).

There isn’t anything necessarily wrong with this, but to me it lacks creativity.

Remixing is an opportunity to take an idea and show people how you would build a track around it.

If I gave 10 producers the same exact chord progression and melody and told them to produce a track with them, all ten tracks would be different. This is part of what makes remixing so exciting to me. You’re able to take a core idea and take it somewhere only you can.

Staying in the pocket and playing it safe with a remix won’t get you anywhere.

Do you think Martin Garrix is impressed when somebody sends him a stereotypical future bass remix of one of his tracks? Of course not. No matter how well it’s produced, it doesn’t add much to the original.

Take a chance and try to create something the original artist will never forget.

C. It brought Medasin’s style into the original

If you’re a fan of Medasin’s music, you’ll notice this remix is similar to the style of most of his tracks.

I don’t know the story behind this remix, but my guess is Medasin was contacted to remix this song because the original artist was a fan of his style and wanted to see what he’d do with the track.

There is a difference between this and a radio or club friendly remix. This was a creative remix, an opportunity for Medasin to add his flair to the original.

One of the best ways to gain an opportunity to remix a bigger artist’s track is to craft a unique style that the bigger artist becomes a fan of.

This is easier said than done, but it’s something to keep in mind. Outside of having the “right connections”, if your music is unique and exciting, you’ll have a much better shot at landing big remixes.

For example, one of my favorite remixes from last year is from an artist called Araaten. They were on the remix package for Martin Garrix’s There For You.

This is a prime example of a smaller artist given the opportunity to remix a bigger artist because they were a fan of their style and sound.