The Theory & Arrangement Behind Arty’s “Together We Are” & Audien’s “Hindsight” (Pt. 1) 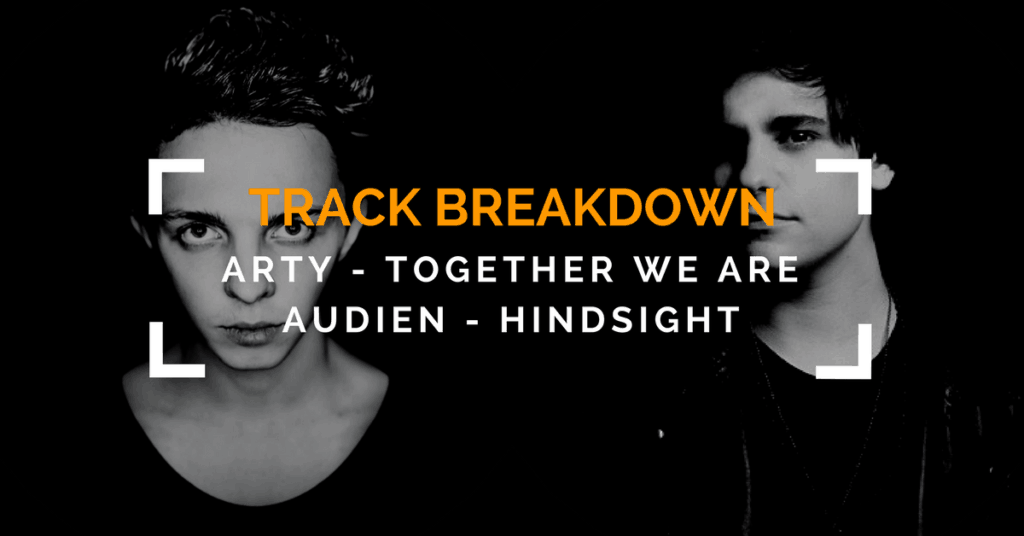 Hey producers, welcome to the latest installment of our tutorial series, Track Breakdowns.

In this series, we take a look at a wide variety of popular tracks, dissect them, and discover why they work.

Ultimately, I aim to teach you the techniques used in each track so that you can apply them to your own productions.

In this breakdown, we’ll be looking at two different songs: Together We Are by Arty and Hindsight by Audien.

Why did I choose these two?  As we’ll find out later, neither of these songs are in a major or minor mode.

Mode – a type of scale

Major and minor are types of modes. There are seven (common) modes used in popular music.

You may have heard some of their names thrown around: Lydian, Ionian (major), Mixolydian, Dorian, Aeolian (minor), Phyrgian, and Locrian.

Whats cool about these different modes?

Each mode has a distinct emotional blueprint. Rather than limit yourself to the emotional quality of only the Ionian (major) and Aeolian (minor) modes, learning other modes is a great way to expand your songwriting palette. 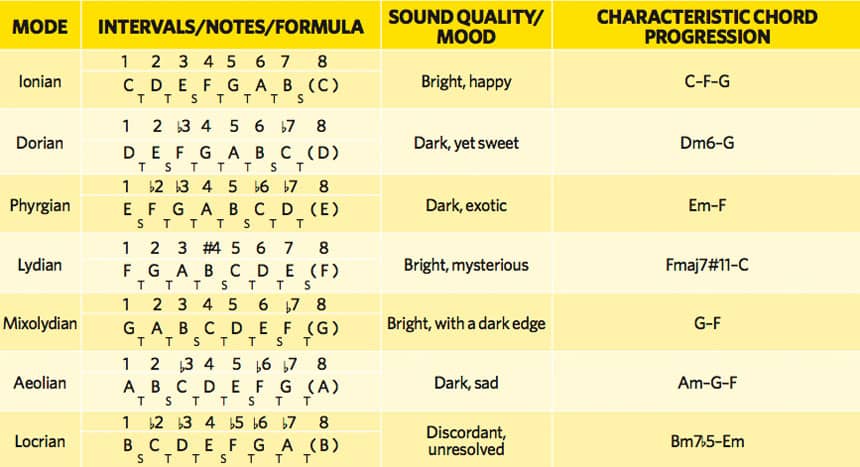 In this article, I wanted to give you a practical and actionable breakdown of two popular modes: mixolydian and dorian.

We’ll break down the formula for each of these modes, and take a look at a real world example of these modes in action. We’ll learn exactly what makes these modes unique, and how we can utilize this when building progression and melodies. 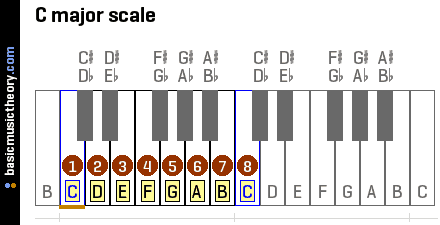 There is only a one note difference between the major scale and mixolydian: the seventh.

As you can see below, the C major scale and C mixolydian mode are nearly identical, except instead of a “B”, C mixolydian has a “Bb”. 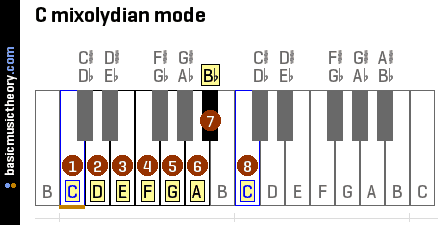 How do we build a mixolydian scale?

If you’re familiar with major scales, all you need to do is build a major scale and drop the seventh down a half step.

Alternatively, recall that there is a formula to build a major scale off of any note. “W” represents a whole step and “H” represents a half step. 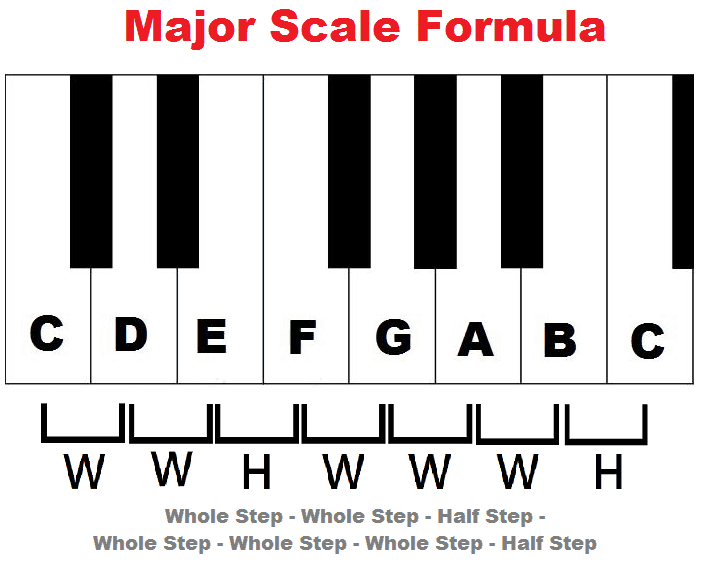 There is also a formula for building a mixolydian scale:

Using this pattern, you can build a mixolydian scale off any note.

How to Write a Mixolydian Chord Progression

Writing a chord progression in a mixolydian mode is the same as in any other.

Once you’ve decided what key you are in, it’s best to find what diatonic triads are in that key. Then, simply build a progression using those chords.

Because of the flatted seventh note, the chords in a mixolydian mode will be different than those in a major key.

For reference, here are the seven diatonic triads in the key of C Major.

Now, let’s look at the diatonic triads in C mixolydian.

You’ll notice three differences between C major and C mixolydian: the three chord, the five chord, and the seven chord (I’ve bolded these above).

In C mixolydian, the three chord is E diminished, the five chord is G minor, and the seven chord is B major.

When building a mixolydian progression, the fifth and seventh chords are great chords to use since they are part of what gives the mixolydian mode it’s distinct emotional tone.

The fifth is the called the “color chord” of mixolydian, as it gives the mode it’s bright and hopeful sound.

Let’s look at an example, then dive into the first track analysis.

Below is a chord progression in C mixolydian.

This progression isn’t too complicated, but (to my ear) sounds pretty nice. This is because it unlocks the color chords of the mixolydian mode.

In particular, it uses the five chord, Gm.

Have a listen below. 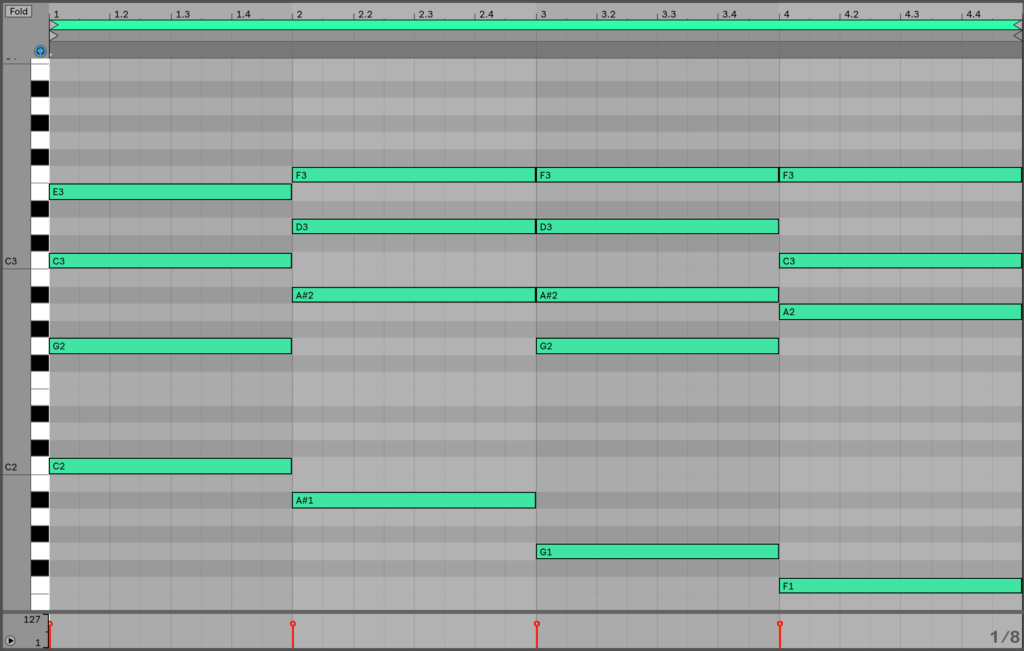 (I’ve added a seventh to the Gm, making it Gm7)

Notice how peaceful and hopeful this chord progression is?

This is the characteristic sound of the mixolydian mode. It’s brighter than a minor key, but not over-the-top happy.

Many people called mixolydian the Coldplay mode, since many of their songs are written using it.

And of course, Together We Are by Arty.

Mixolydian Progression Analysis: Together We Are by Arty

Together We Are is in the key of F mixolydian. 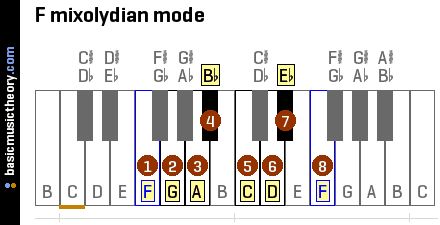 It’ll be the minor five chord. This means the color chord is C minor.

Let’s take a look at a transcription of the main progression. 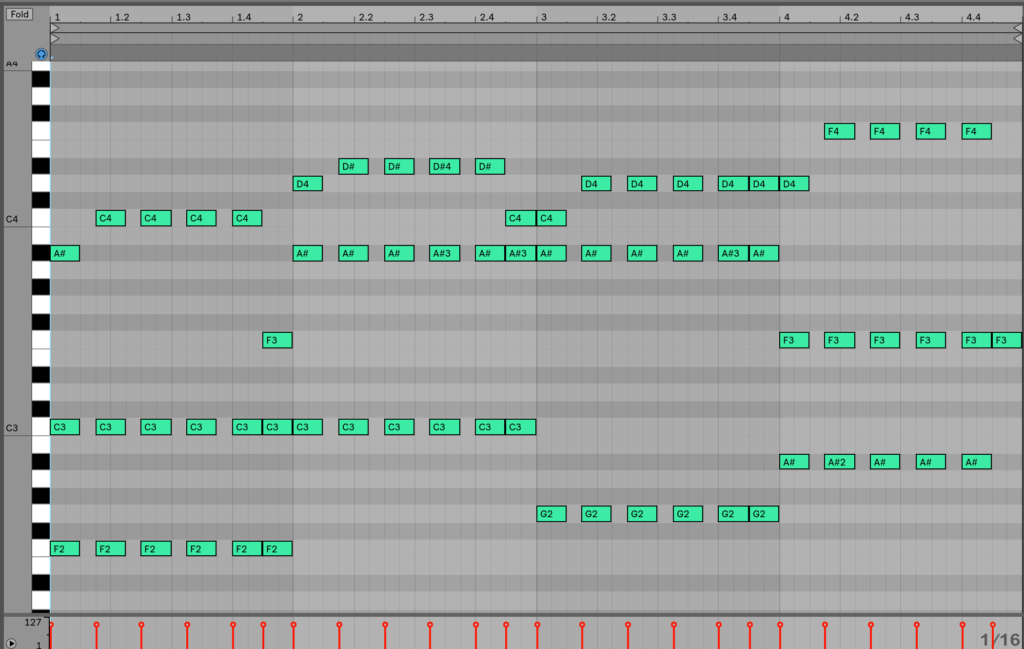 Let’s simply these chords, removing the rhythm and putting them in closed voicing. 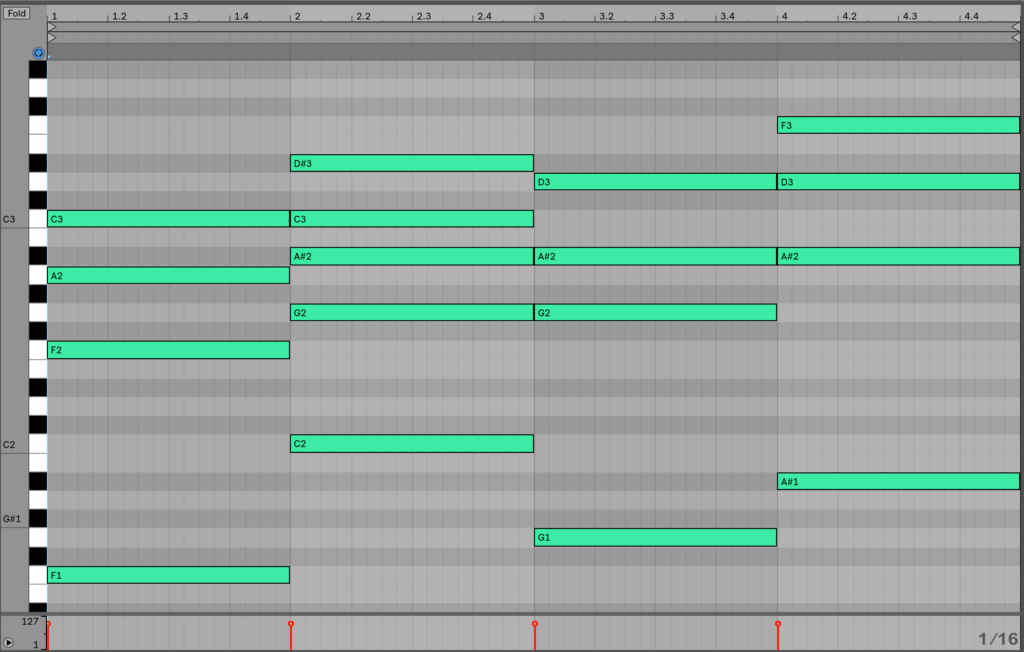 Alright, what are we working with?

This is a nice, solid progression. It starts on the one, moves to the five (i.e the color chord), goes to the two chord, then finishes strong on the four chord.

Other than the progression itself, what makes this track work?

Without even listening back to the original progression, we can nearly see what makes the progression work.

The two elements are:

The open voicing of these chords (i.e. they take up wider then an octave range) makes the progression big and full. This fits well with the anthemic vibe of the song.

Lastly, what is meant by top note contour?

This progression slowly builds in energy as the top note climbs higher and higher.

Listen back to the progression, and hear how the energy almost “opens up”, building higher and higher towards the end of the loop. This is in good part due to the climbing top line.

Let’s do a quick recap of what we’ve covered so far, allowing you to make the most of this article.

For part 2 of this article, including the breakdown of Audien’s Hindsight, click here.