The Theory & Arrangement Behind San Holo’s “One Thing” 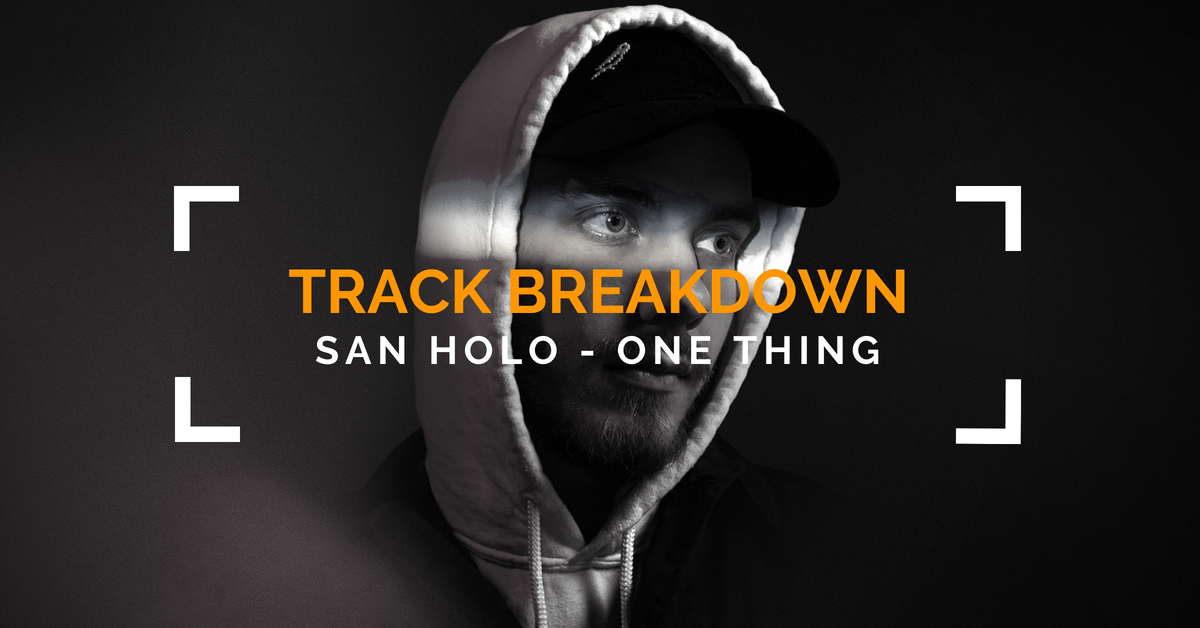 Welcome to the twelfth installment of my article series, Track Breakdowns.

In this series, I look at the theory and arrangement behind popular songs, ultimately showing you what makes each song work.

In this breakdown, we’ll be looking at San Holo’s track One Thing.

Like most San Holo tracks, this song is a streaming friendly dance hit featuring catchy melodies, a poppy chord progression, and a memorable hook.

Let’s look at some of the key techniques San Holo uses in this track to craft a catchy and memorable arrangement.

One Thing is in the key of E Major.

Below is a transcription of the main chord progression.

This chord progression is pretty straightforward.

It uses four diatonic triads, with each chord one bar long. No extensions or borrowed chords, nothing too fancy.

All in all, this is a very pop-sounding chord progression.

But One Thing isn’t some stale pop track; it’s an extremely fresh and exciting arrangement that continues to blow up the charts.

So the question is: How was San Holo able to “disguise” this chord progression?

The first way San Holo added interest to this progression was with a simple chord substitution.

See, the chord progression I gave you above didn’t tell the whole story.

In the last 4 bars, rather than landing on F#m at the end, it switches to a B major chord.

Take another listen to the chord progression, and focus on how the final chord is unexpected, but well invited.

The application of this technique is simple.

Duplicate your chord progression, then change 1 or 2 chords the second time through.

Reach for another diatonic triad, and consider the emotional quality (i.e. major/minor/etc..) of the chord as well.

Below is a breakdown of when this chord progression is played in this song. As you can see, it’s present throughout most of the track.

Also, my sporadic coloring in the above image wasn’t on accident.

The verse starts out with a plucky electric piano sound (red clip), moves to a synth swell in the second half of the verse (light blue clip), then is picked up by a guitar in the pre-chorus (orange clip).

So although we hear this chord progression for a minute straight, we’re not hearing it in the same form.

As I always say, this is the key to effective songwriting: the ability to create development that’s new, but familiar.

While this covers the chord progressions used in One Thing, it just scratches the surface on what makes this track work.

Let’s dive into a few more techniques that San Holo uses to craft a catchy and memorable song.

Grab Them With The Intro

In a recent interview on Willy Joy’s Back to Back Podcast (shout out to Willy Joy—we interviewed him here), producer Ookay talked about a revelation he had about hit songs.

Ookay mentioned that with nearly every hit song, you know what that song is the second it starts.

All of you reading this know exactly what I’m talking about.

You’re at a show, the DJ makes a transition into a new song, and within 2 seconds the crowd goes crazy because they all recognize the intro.

In an era where streaming-friendly is becoming more important then club-friendly, you need to grab the listener’s attention right away.

You want the first few seconds of your track to be identifiably yours.

This is one of many things that separates San Holo from the thousands of producers trying to chase him.

He understands the importance of an arrangement that quickly hooks the listener in, then continues to hold their attention.

The lesson here is simple: stop falling into the same old boring habits for your intros.

If your intro doesn’t hook in the listener, they won’t listen long enough to hear what you have to say with your music.

Let’s talk about a powerful melody writing technique that San Holo uses in this track.

Below is a transcription of the main chorus and pre-chorus melody.

San Holo embraces the power of the tonal center in this melody.

What is a tonal center?

Tonal center: the note where music in that key feels “at rest”. It is also called the tonic. (via earmaster.com)

A perfect example of a tonal center is the one chord. The one chord feels like home, and it’s where your progression is most at rest.

The same can apply to a melody.

The tonal center of your melody is where that melody will sound at rest and resolved.

The tonal center is simply the root of the key you are in.

While there are exceptions to these rules, they often times hold true.

Let’s relate this back to the melody in One Thing.

This track is in the key of E major, meaning E is our tonal center. It’s the melody note that sounds at rest, that resolves that tension.

Below, I’ve highlighted two instances when the melody plays the note “E”.

Take a listen, and notice how the melody doesn’t feel resolved until it lands on those E’s (especially the one at the end).

That is the power of the tonal center.

In this instance, San Holo is using the pull of the tonal center to play with the expectations of the listener, creating tension that isn’t fully resolved until the end of each 4 bars.

The tonal center acts as an anchor, pulling the rest of the melody notes towards it.

A perfect example of another artist who uses this technique is Porter Robinson.

Take the main melody in his track Unison. Listen to it in the original below.

Below is a transcription of this melody.

Although this melody seems as if it’s a bit all over the place, it’s easy to follow.

It’s because this melody uses the pull of the tonal center to keep it grounded.

Unison is in the key of F#m, making the tonal center F#.

Porter Robinson uses this F# as an anchor, straying far away from it, but always finding it’s way back.

Now what can you take of away from this?

Leverage the pull of the tonal center to craft dynamic and catchy melodies.

You can use it in the way that San Holo did in One Thing, playing with the listener’s attention by delaying the resolution of the melody, or as Porter Robinson did in Unison, using the root note as an anchor for an active and dynamic melody.

Let’s look at a cool trick San Holo uses in this track to recycle one of the main vocal melodies.

Below is a transcription of the first 4 bars of the vocal melody.

San Holo recycles this melody in the post-chorus, choosing to use a guitar to play it.

He transcribed the vocal melody, played it on the guitar, then used it to bridge the first chorus and second verse.

This relates back to the idea of rephrasing, which is when you take a melodic idea and “recycle” it, presenting it in a new way.

When the guitar picks up, there is an element of movement because the instrumentation has changed, but there is also a sense of similarity since we’ve heard that melody before in the vocal.

The listener won’t consciously pick this out, but they’ll feel at home when the guitar melody takes over.

How can you use this technique?

If you’re working with a vocal (especially during a remix), transcribe one of the vocal melodies and look to add it elsewhere in the song. This is a great way to create development that feels both natural and familiar.

For example, you could take the first 4 bars of the the vocal melody in the verse and use it as a starting ground for a lead in your chorus. Find parts of the vocal that you like, and get creative with it.

Many of our recent podcast guests, such as Bonnie X Clyde and James Ruehlmann, talked about how it’s a streamers market in 2018.

They preached that in order to succeed in this industry, producers should focus on writing songs, not bangers.

This makes a ton of sense.

Club tracks are great, but they’re exactly that: club tracks.

Well written songs are the ones that get streams. They’re easier to listen to, easier to digest, and more likely to hit the charts.

Labels, promoters, and booking agents are all looking at your streaming numbers.

If you’re looking to build a sustainable career in this industry, you need to put more focus into crafting memorable and catchy songs.

Now don’t get me wrong, I love good banger every now and again…

But if I’m listening to music in the car, I’m going to reach for something that’s a bit more digestible. I’ll save the heaters for a more appropriate venue.

So why am I talking about this?

Because there is a best of both words: a forward thinking production with a memorable, user friendly arrangement.

San Holo is one of the best in the business at this.

In One Thing, he meshes unique sound design with a wealth of catchy hooks and melodies.

Play this track for a friend, and I promise you they’ll immediately be able to sing back the hook.

So what can you take away from this?

Music isn’t going to get any less musical anytime soon.

If you want a sustainable, lasting career in this industry, you can’t afford not to invest time and energy into improving your craft as a songwriter.

In light of this, let’s dissect a key arrangement technique that San Holo uses in this track to craft a compelling arrangement.

It’s important for arrangement to have strong sectional differences.

When your track changes sections, it should be clear that a shift has occurred. The change shouldn’t be abrupt, but enough that the listener knows they are somewhere new.

Without this, the listener will simply get bored.

Most producers fall into this trap in the pre-chorus.

Far too many producers send me songs where the pre-chorus is literally just the verse with a drum build.

That’s not a pre-chorus. That’s just a verse with drums.

And unless that verse is truly groundbreaking, the listener is going to get bored. Real fast.

When I’m listening to music from artists like San Holo, KRANE, or Ekali, each section is clearly distinct.

On top of this, many of them feature first and second verses that are similar, but different (this is the case in One Thing)

Whatever YouTuber taught you to simply copy your first verse and chorus over has never heard a good arrangement in their life.

Now, I want you to listen back to the arrangement of One Thing.

Feel free to skip around. Notice how the first half of the verse feels different then the second half, the pre-chorus takes the track somewhere new, and the chorus pushes the track even further.

This is the storytelling aspect of music that’s been lost in the banger age of edm.

To put is simply: stop selling your music short.

Tap into the inspirations that got you hooked on music production, looking to craft arrangements that genuinely resonate with the listener.