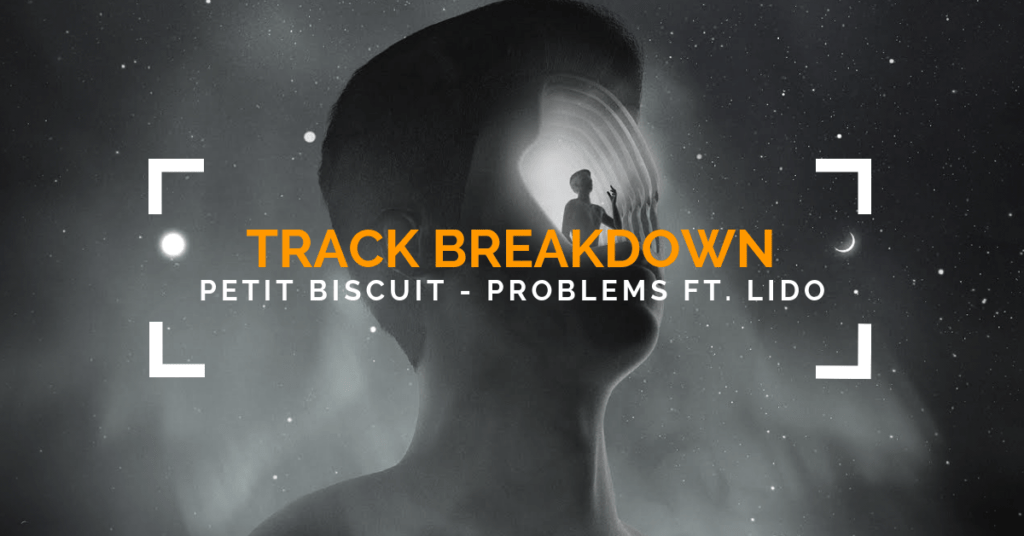 What do you do?

Find the middle ground, which Petit Biscuit and Lido do in Problems.

This track strikes a great balance between simplicity and complexity.

It’s simple in the sense that it has a pop-like structure and arrangement.

But it’s also complex. It has a character and attention-to-detail rarely seen in pop music.

In this breakdown, we’ll look at how Petit Biscuit and Lido crafted a successful hit (25+ million streams) by striking this balance.

Problems is in the key of C# minor.

Here’s the chord progression used in the first verse.

Let’s take a deeper dive into this chord progression to understand what makes it work so well in this track.

The first thing I want to discuss is how the notes in my transcription add up to the chords they used.

Let’s look back at the first chord in the progression, which is Amaj7.

If you look at the transcription, you’ll notice that the chord on top only has the notes C#, E, and G#. There is no A.

So how is this an Amaj7 chord?

However, since the bass and chord are playing at the same time, we need to analyze them alongside each other. This means that A in the bass plus C#, E, and G# in the chord adds up to A – C# – E – G#, or in other words, an A major seventh chord.

So why would they choose to not play the root note A in the chord?

The primary reason is to open up the mix.

You can think about this like splitting up a chord between two instruments.

Let’s say you have a piano and bass in your track. You want to play a C major chord (C-E-G).

The bass could play C while the piano plays E and G.

The combined harmony will still be a C major chord, you’ve just spread it over two instruments.

Moving back to Problems, removing the root in the chord opens up the mix by creating less clutter.

By removing unnecessary notes, you can create a cleaner mix without ever touching an EQ.

Let’s listen to an example of that Amaj7 from above with and without A in the chord.

The quality and feel of the chord stays the same, but the second chord (without the second A) sounds more open. It’s less cluttered.

The difference is subtle, but it’s there.

Takeaway: Think about whether you really need to include the root note in the chord. If you’re playing the root in the bass, you can often get away with removing it in the chord.

Again, this technique can help clean up your mix. It works well when you’re using a big instrument like a supersaw that covers a large range in the frequency spectrum.

This isn’t something you should always do. I’m not encouraging you to always remove the root. Instead, experiment with this technique. Find ways to incorporate it into your songwriting workflow.

This chord progression starts on the six chord, Amaj7, then moves to the one chord, C#m7. The C#m7 is played like the Amaj7, where the root is removed in the chord and only present in the bass.

After that, they move to a more complicated chord, which is C#m11/B. Let’s talk about what this chord is, and why it works so well.

In Problems, they play it without a D#, but I’ll still call it a C#m11 for simplicity’s sake. Someone who cares more about theory might call it C#m7(add4) or C#m7(add11), but this chord is gross enough already.

They also play this chord as a slash chord.

A slash chord is a chord that specifies a bass note other than the root.

Typically, you’ll use the root of the chord in the bass. However, you can use notes other than the root to create a slash chord.

Which bass notes can you use?

The third and the fifth of that chord are the most common, as they help support the notes already in the chord.

You can use any other note in the scale, but these will reinforce the chord much less.

For example, if you were in C major and had a C major triad (C-E-G), you could use E or G in the bass, or any other note in that scale (D, F, A, or B) for a weaker version of that chord.

But why would you want a weaker chord?

A weaker chord offers instability, which can shift the emotional narrative of a track.

Slash chords build tension by using bass notes that don’t reinforce the chords above them.

Instead of using a chord as usual, you can use a slash chord to add tension that leaves the listener wanting more.

So how does this relate back to Problems?

As I mentioned, the third chord is C#m11/B. That means it is a C#m11 chord with B in the bass. Looking at the full chord, that means the seventh is in the bass.

Listen back to my transcription, and notice how the third chord fits well while adding a good amount of tension.

What can you take away from this?

First, slash chords are an effective way to change the character and feel of a chord. They can also help you craft more fluid and cohesive basslines (for more on this, check out my breakdown of Kaytranada’s track “Got It Good”).

Second, try to embrace the more tense and ambiguous side of chord progressions.

Too many producers stick to predictable patterns with their chord progressions.

The C#m11/B chord in Problems doesn’t seem like a chord that should work in theory, but it works well in context. Why? Because it takes the energy from those full diatonic seventh chords and blurs it, adding a weak slash chord that leaves the listener on edge.

There isn’t one chord or one technique that will help you achieve this instability. I like to use heaps of slash chords and added tones chords, but there are plenty of other viable techniques.

Takeaway: push yourself to find unique and creative ways to add tension and instability to your chord progressions.

Let’s look at two simple techniques used to add more flavor and character to this progression.

These are two fundamental but effective ways to add movement to a chord progression.

The reason these work so well is they help you get out of that basic 4-bar, 1 chord per bar chord progression trap.

Pushes and pulls are pretty straightforward. Rather than starting each chord directly on the bar, you push the start of some chords earlier or later. It’s a simple but effective way to create more interest and variation.

Below is an example of a chord progression both without and with pushes and pulls.

In Problems, rather than having a chord hit directly on the 4, they delayed the next chord for half a bar. This creates tension because the listener expects a chord to hit on the 4, since each chord so far has hit on the bar line. Listen back to this in the transcription.

The second technique is the use of passing chords.

Rather than holding out the third chord for 2 bars, they used two passing chords at the end of the progression.

A passing chord is a chord that helps you move from one chord to the next. They’re normally quite short and aren’t a part of the fundamental chord sequence.

Passing chords are a more interesting way to get from point A to point B.

In Problems, they used passing chords to pick up the energy and rhythm left by the sustained C#m11/B chord.

Because passing chords are only played for a short amount of time, there is a lot you can do with them.

They allow you to build up tension that’s immediately released, helping to create more exciting and compelling chord progressions.

In Problems, they kept things simple by recycling two of their previous chords as passing chords.

Takeaway: you can use pushes and pulls to create more interesting rhythmic patterns. You can use passing chords to add excitement and variation to the flow of a chord progression.

If somebody skips through your song on Soundcloud, it’s likely that your core idea isn’t interesting or it’s too repetitive.

Extended progressions are a great way to fix this problem.

The goal is to create an idea that’s new, but familiar. It’s familiar because it relates back to the first half, but new because there is some degree of variation.

To add variation, you can play with the chords used (adding substitutions) or tweak the pattern and rhythm of the chords.

In Problems, they move from the progression we looked at above to an extended progression in the first pre-chorus and chorus.

Let’s dive into the second chord progression they used in this track.

In bar 5, it again lands on Amaj7, but instead of moving to C#m7 it switches to Emaj7. After that, it moves to F#m9, until it ends on the same two passing chords.

The second half of this progression feels familiar because the first chord is the same, the passing chords are the same, and the rhythm is the same.

However, it sounds new because the second and third chords are different.

This variation pushes the development of the track in a natural and exciting way.

So what in particular makes this extended chord progression work?

This progression works because there is a purposeful distinction between the first and second halves.

The first half of this progression is moody and full with a very limited motion.

The second half of this progression offers contrast by introducing more movement. It moves from the VI to the III to the iv.

Whereas the first half of the progression is quite static, the second half is more emotive and dynamic.

Listen back to this in the transcription. Focus on how the Emaj7 shifts the narrative of the progression, and how the F#m9 acts as the first sense of “relief”.

This is one of many approaches to create an extended progression.

When writing your own extended progressions, there are two keys to focus on: purpose and distinction.

First, understand why you are creating an extended progression. Do you want to add subtle variation to push the track forward, or do you want a more dramatic change that shifts the narrative of the track?

The answer to this question will help you determine how much variation you need to add.

This ties directly in with the idea of distinction.

In the chorus progression in Problems, the second half of the progression was distinct from the first. This kept the track both interesting and exiting.

In other words, distinction provides development, which is what makes a song exciting to listen to.

To tie these two ideas together: focus on creating purposeful distinction with your extended progressions.

Different Chord Types, How They Sound, and How to Build Them

The Ultimate Guide to Writing Better and More Memorable Melodies

How to Write a Catchy and Memorable Chord Progression

The Theory & Arrangement Behind Flume’s “Say It ft. Tove Lo”