3 Ways to Write a Drop: A Songwriter’s Guide to the Loop Trap 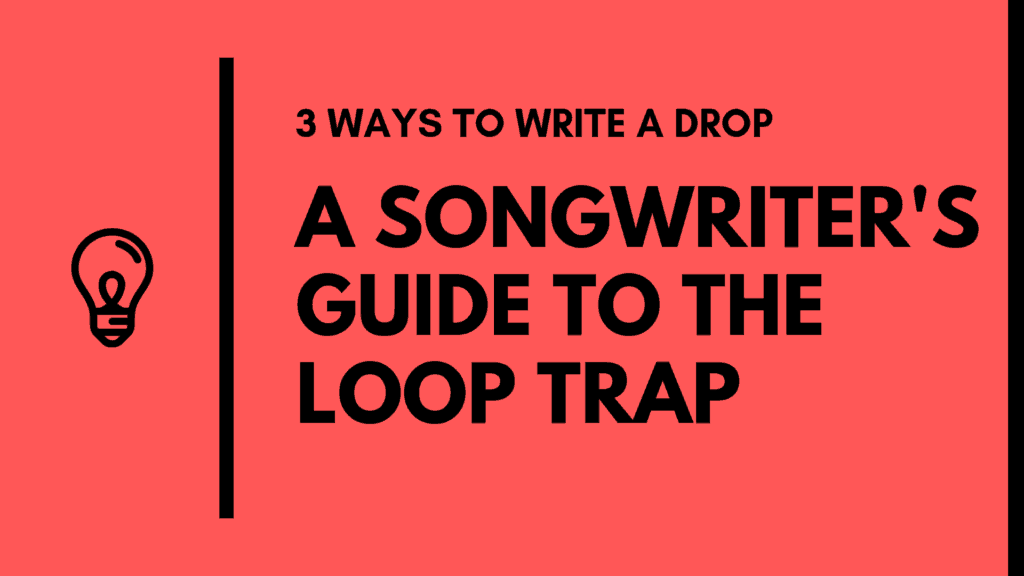 Recently, Sam posed this question in our EDMProd Facebook group: 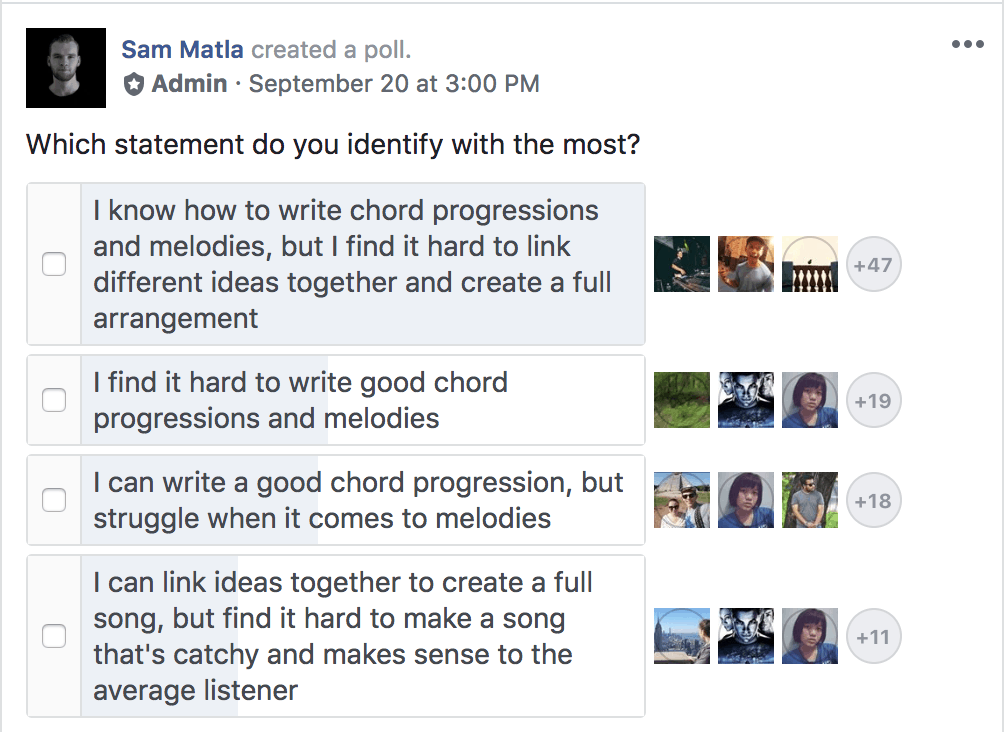 You can create a great verse or chorus, but struggle with where to go next.

Most of the time you don’t finish any songs at all, but when you do? They don’t do well. No one listens to them. They don’t connect with anyone.

In this article we’ll tackle this problem head on.

We’ll look at how to take a loop that you’ve created and develop it into a full track in a way that actually makes sense.

A Songwriter’s Approach to the Loop Trap

Instead of treating this as a production problem, we’ll view this issue as an arrangement problem.

If you have the production skills to create a great 8-bar loop, you’re fully capable of producing a full song.

If you can’t develop that loop into a full song, it’s not because you can’t produce well enough.

It’s because you don’t know enough about arrangement and songwriting.

So in this article, we’ll treat the loop trap as an arrangement issue.

If you’re a music theory newbie, don’t get scared off. These are simple concepts that all producers can apply.

The Three Ways to Craft a B Section

The question is: how do you create an A section and a B section that work well together?

Most often, a chord progression or bassline will serve as the foundation for your A section.

Once you’ve established a harmonic foundation with your A section, there are 3 places to go with your B section:

While this may seem like an oversimplification of this process, the truth is: it is simple.

The key to a smooth arrangement isn’t snare fills and white noise – it’s chords and melodies.

Iterative Approach: Use the same chord progressions in your A and B sections

This technique creates an effortless transition between two sections.

Since the chords progressions are the same, the flow will be natural and familiar.

However, there needs to be an element of distinction that keeps the listener engaged.

If there is no variation between your A and B sections, the listener will lose interest.

Use this approach when your A section is solid and you don’t want to stray too far away from it.

Instead of taking the track somewhere completely new, you can build off of that initial idea.

The basis for this technique is to use the exact same chord progression in your A and B sections.

You can keep the instrumentation the same or introduce a new instrument that plays off of that idea.

Either way, you must add variation around that idea to create contrast.

How to add distinction to your B section:

Tip 1: Add layers on top of your A section progression to create dynamic contrast.

You can introduce additional layers that add energy and weight to your B section.

Tip 2: Introduce a new melody or disguise an existing melody.

An obvious choice is to introduce a new melody that serves as the lead for your B section.

You can also disguise the main melody used in your A section. Simply copy your A section melody over into the B section then change the sound used to play it.

This tip is self explanatory. Introduce a new drum loop consistent with tracks in your genre.

Alongside the previous tip, you can introduce percussive elements that add tension and development.

Tip 5: Add pads/layers to give the B section a distinct sonic character.

This is a great way to create sonic separation between your A and B sections.

Tip 6: Add or remove the baseline.

You can use this technique to increase or decrease the drive of your B section.

Distinction doesn’t just mean moving from a quiet mix to a loud mix. Consider removing elements to create a separation between your A and B sections.

Development Approach: Add meaningful adjustments to the chord progression from the A section

The goal is to present the main idea from your A section in a new way.

You can rephrase the instrumentation of that idea, as well as the presentation.

Presentation refers to way you present that chord progression.

For example, if you have a 4 chord progression in your verse, you can create variation by changing 2 of the chords.

This will create development that is both new and familiar.

To summarize: take the main idea established in the A section and present it in a new way.

Many songs will use a combination of both types of rephrasing.

They’ll make adjustments to both the instrumentation and the presentation.

I talk about this extensively in my breakdown of Mura Masa’s track “Lovesick”.

This approach works well in nearly every situtation.

It’s the most common technique in electronic music, and serves well for all styles.

First, move the chord progression used in the A section into the B section. Then, make changes to the instrumentation and presentation of that idea.

As instrumentation is genre-specific, I can’t provide you with exact recommendations.

From a harmonic perspective, there are many ways to develop a chord progression.

How to develop a chord progression:

Tip 1: Change one or two of the chords.

You can change a few of the chords to alter the feel and character of that progression.

Tip 2: Change the timing of the chords.

You can push or pull the start of certain chords to adjust the overall rhythm and timing.

This is a great way to play with the listener’s expectations.

Push/pull example: before and after

Passing chords are short chords inside of the existing chord sequence.

Adding passing chords is a great way to add drive and movement to your B section.

Passing chord example: before and after

Tip 4: Change the pattern of the chord progression.

Instead of playing all of the notes at once, you can break them up and play them separately.

This will disguise the original progression, creating a sense of development and variation.

Broken chord example: before and after

Arpeggio example: before and after

Tip 5: Change the rhythm of the chord progression.

You can add a distinct rhythmic pattern that develops the idea presented in the A section.

Rhythmic variation example: before and after

Tip 6: Change the voicing of the chords

You can use inversions to alter the voicing of the chords.

This will disguise the original chords, making them feel new. Since the quality of the chords are the same, there is an element of familiarity.

There is a great example of this technique in my track breakdown of Kaytranada’s track “Got It Good”.

Chord voicing example: before and after

Diversion Approach: Introduce a new chord progression in the B section

The idea is introduce a new progression that shifts the narrative of the track.

This technique strays from the typical pattern of repetition and variation.

The goal is to create a shift that is unexpected, but welcomed.

The diversion approach works well when you have a solid A section but want to take the track somewhere new.

While this approach is great, it’s not for every track.

I like to use it when I have a good idea in my A section and am inclined to take the track somewhere new.

If my A section is solid, I’ll likely opt for one of the first two techniques to build directly off of my core idea.

As discussed, the main way to apply this technique is to introduce a new chord progression in the B section.

Introducing a new chord progression will immediately shift the tone of your song.

However, it’s easy to create a sharp shift that throws the listener off.

When using this approach, focus on creating an unexpected but welcomed transition.

How do you change chord progressions in a way that feels natural?

Tip 1: Make sure both progressions sound good by themselves.

In order for this transition to work, the new progression must stand on its own.

Make sure there is a purposeful distinction between the two.

Tip 2: Consider both the quality of chords you are using, as well as the emotional tone of each progression.

From a theory level, this is achieved through chords you use. To create distinction, simply use different chords in your B section. You may have to reuse one or two chords, but the overall progressions should feel distinct.

Tip 3: Use diatonic substitution for a smooth transition

Diatonic Substitution: A chord substitution using a chord with a similar harmonic function.

Instead of starting with the same chord, you can start on a chord with a similar harmonic function.

Harmonic function: Describes the role that a particular chord plays in the creation of a larger harmonic progression (via Open Music Theory)

While I recommend you learn more about harmonic function, you don’t need to know it to apply this technique.

The following chords are interchangeable in any major key: 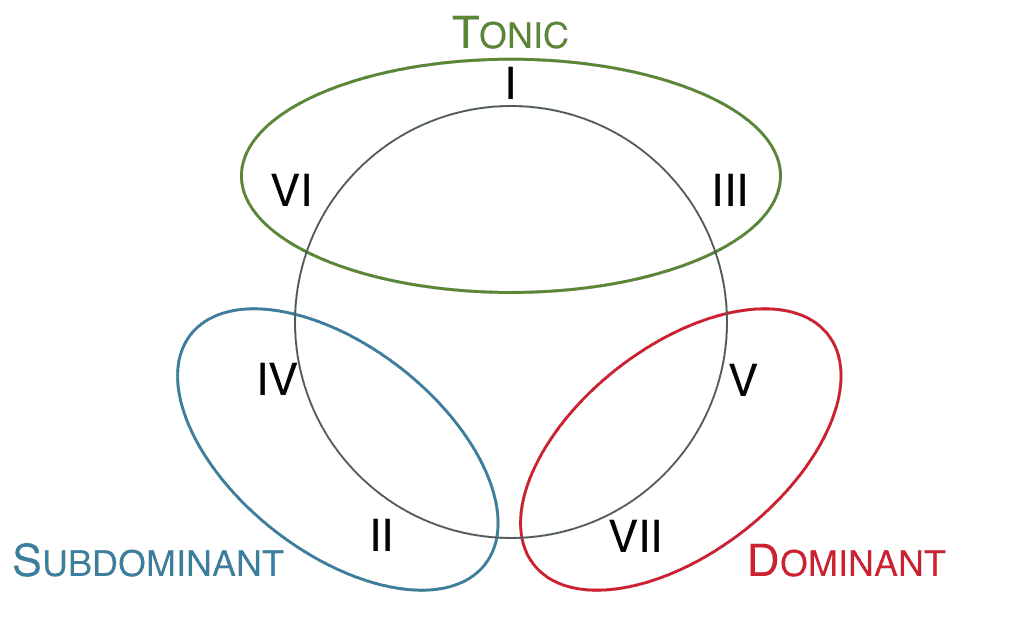 Since the starting chords are similar, the transition will feel smooth and familiar.

The key with this technique is trial and error.

Start your B section on a different chord, then leverage your songwriting knowledge to create a full and exciting progression.

For more information on how to switch progressions, check out my breakdowns of Flume’s “Say It” and Louis the Child’s “Better Not”.

This framework simplifies the arrangement process to just three techniques.

You can use the Iterative Approach, the Development Approach, or the Diversion approach to develop a new section.

If you’re stuck writing a B section, it’s time to put aside your VSTs and drum loops.

Focus first on the chords and melodies, then fill in the blanks later.

Producing with this mentality will help you stop making loops and start making songs.