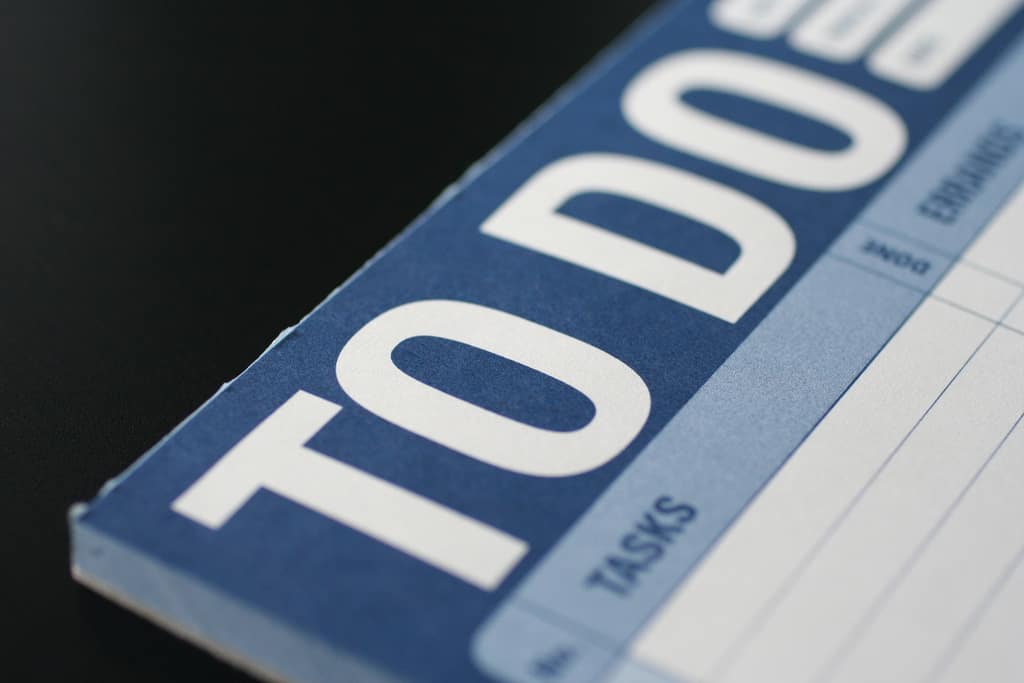 Task-based music production is the workflow for you.

In this guide, you’ll learn exactly what task-based music production is, why it’s so powerful, and how you can incorporate it into your creative workflow.

An Overview of Task-Based Music Production

Task-based production involves breaking up the typical processes in the production of a song and organizing them into individual tasks.

“Write Chord Progression” could be an example of a task, as could “Design sound for bassline.”

The main benefit of following this approach is that it gives you a clear path ahead. You know exactly what you need to do to move your project forward. You’re less likely to procrastinate.

It’s crucial to have an existing idea for a track before setting tasks. It gives us something to work from, rather than staring blankly at the piano roll in front of us, and it also allows us to set more specific tasks.

A song map is essentially a brainstorm for your project. It’s a bunch of ideas, themes, and thoughts—usually written down on a notepad.

Inspiration can be anything from thoughts, to images, videos, words; you name it!

It might also be melodies, motifs, and other sounds you’ve found in music you’ve listened to.

Note: I recommend writing this down in a note or document. Whichever’s easier.

I first picked up this technique from the Jaytech Elite Session on Pyramind. Basically the idea is to choose a few musical themes. I like to include non-musical themes also, for example:

For more info on how to do this, check out The Song Palette Strategy.

The final thing to do is really tap into the track you’re about to produce. Ask questions such as:

Take a break, go grab a coffee, and get ready for the next part.

You don’t need to create a task for every single action you need to take during the production process. That’s impossible.

Instead, set up fundamental tasks. Things that you know you need to work on.

Here’s how I’d set up tasks in Asana.

The first thing I’d do is create three main sections for my tasks, namely: composition, sound design, and mixing.

Note: you can do this under the Projects section in Asana.

In my opinion, these are the three main elements that make up production. Of course, you could divide them up even further, for example dividing composition into arrangement and programming – but I like to keep things simple.

Next thing I’d do is create simple tasks that are most likely going to have to be done. You should already have an idea for your song at this point meaning you can include track-specific tasks. You might include a task that reads “Create piano melody”, because you’ve already planned to have a piano in your song.

Try not to go overboard on this. It doesn’t matter if you miss a task out, and you don’t need to include every single task.

As you can see, these are pretty straightforward.

I didn’t include the bassline as I like to design the bass sound before really working on my bassline. Also due to the fact that it isn’t difficult to draw out a bassline from an already existing chord progression/melody. The crossover between sound design and composition can prove difficult when working like this, but it’s really just about finding out what works and what doesn’t.

I’ll add the next set of tasks under the Sound Design section.

Again, nothing too complicated – just logical and concise. There’s no need to insert more tasks than necessary.

Make sure to assign each task to yourself. This is important for later.

I’m going to leave the mixing tasks alone for now, as I prefer to leave the mix until the end. Because mixing is so track-dependent I’m not going to create base tasks for it at the moment. If you wanted to, you could input basic tasks such as “Highpass channels” or “Add compression to drums.” I’d rather not do this due to various reasons, but it’s up to you.

The final step here is to organize the tasks in the order you’d ‘ideally’ like to complete them in.

If using Asana, click on My Tasks and you’ll see all  the tasks from Composition and Sound Design in front of you (and mixing if you added tasks to it).

Note: the tasks will only show if you’ve assigned them to yourself. You can do this by clicking the face icon next to a task then choosing “Assign to Me.”

The final step is to allocate time to each one. Be strict on yourself. Like I said earlier, the aim is to move forward. As soon as  the timer’s up, you move onto the next task. It’s as simple as that (of course you can come back and fix it later).

You can either do this per task basis or rename each task with a time. I prefer to do the latter.

After doing this, it’s time to produce!

Though not quite task-based, I have another solution for those reading who handle multiple projects at once. Maybe you’re a freelancer, contracted producer, or just a standard guy like me who happens to work on a lot of different projects at once.

I have 4 ‘sections’ in Asana: Idea Incubation, Arrangement, and Mixing. From there I move around different projects as they reach different stages.

This is simplicity at its finest, and allows you to visually keep track of what’s going on.

I understand that this is not for everyone. But, if you struggle with procrastination, find it hard to get production work done, and you’re sick and tired of not finishing anything – then this may be a helpful technique to implement.