As mentioned earlier, “diatonic” refers to notes in a key. If we play a scale with diatonic chords, there are certain chord qualities that we must follow to be in key. For a more in depth explanation, check out the previous article on diatonic major chords.

We can play the diatonic minor scale in chords, much like we did with the major scale, and it sounds like this:

If we write it out, the chord qualities from a natural minor scale are:

Memorize that pattern (and the major scale pattern from the previous post)!

But here’s the thing, most of the time the minor scale isn’t played exactly like that. Remember how we have two variations on the minor scale, melodic and harmonic? And remember how I mentioned those evolve because “they lead better to the root note”? Well here’s why.

In almost all Western music, the central, most basic chord progression is V-I. It’s everywhere. It drives everything. Your ears love it, because it sounds so good. The vast majority of songs you’ve ever heard have it. Even if something doesn’t seem to outright have a V-I progression, it’s probably hiding (we’ll get to that later).

Why does it sound so good? Mainly it stems from the 7th note of the scale. The V chord contains 5, 7, and 2 (we stack notes a third apart to get a basic diatonic chord, remember?). And in a major scale, the 7th note is a half-step from the root, which makes your ears want it to resolve to the root. This is a simplified explanation, but you’ll hear it better by playing it (play a G chord followed by a C chord, you’ll hear how well it resolves).

Now look back at the diatonic chords for a minor scale. The fifth chord is minor, not major, which means it’s made up of 5, b7, and 2. Note: Not 7, but b7. The pull isn’t as strong to the root note (a whole step is farther than a half-step), which makes the resolution weaker.

Remember how harmonic minor has a “raised” 7th? Well, that’s because it changes the “v” chord to a “V” chord (thus changing it from minor to major), giving us a resolution as strong as the one in a major scale. So while the natural diatonic minor scale chords have a minor five chord, be aware that often it’s converted to a major five chord by raising the b7 of the scale.

Here are the two back to back. Natural minor using diatonic chords:

TL;DR: The diatonic chords of a minor scale are: i-ii°-bIII-iv-v-bVI-bVII. Often the v chord is turned into a V chord for resolution purposes, which explains the harmonic minor variation of a minor scale. 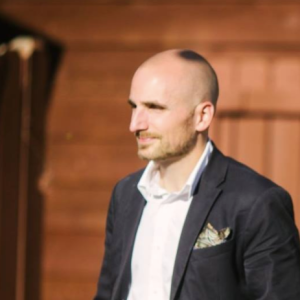