What I Learned from Analyzing the Top 100 Tracks on Beatport 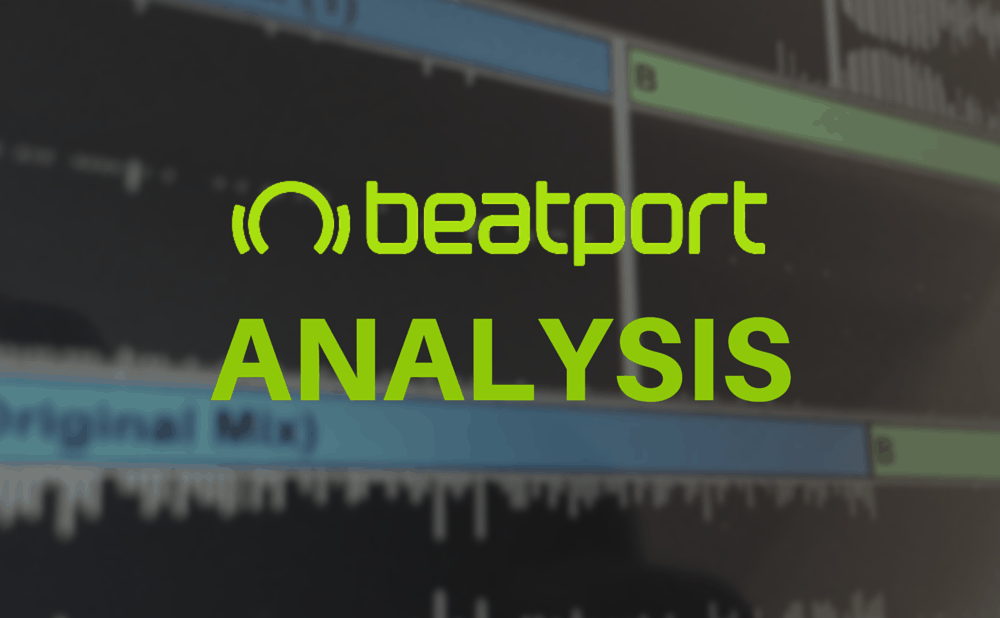 Most of the production tricks I’ve picked up over the years have come not from watching YouTube tutorials or spending time reading through forums, but rather by analyzing and listening carefully to existing music.

A couple of weeks ago, an idea popped into my mind – “I should download the top 100 tracks on Beatport, analyze them, and then write a post on it!”

Which is exactly what I’ve done.

In this post, I’m going to take you through what I found while looking at each and every track in the Beatport Top 100. If you’ve ever wondered key is the most popular, or how long the average techno track is, you’ll find it here.

The process I went through wasn’t complicated, but it did take a fair bit of time.

The first thing I did was purchase and download the tracks. Unfortunately, Beatport doesn’t have a “Purchase Top 100” button, so I had to add them all to my cart manually.

While the tracks were downloading, I sketched up a basic spreadsheet in Google Sheets to collect all my data.

After all the tracks had been imported into Ableton Live, I began to enter data into the spreadsheet. I started with the basics (genre, duration, length, etc.) and moved toward the more unique points of interest such as structure and whether the tracks contained an obvious sample from elsewhere.

The most time-consuming part of this was analyzsing the structure. It’s certainly not difficult to drag a single track into your DAW, listen to it, and mark out its structure, but doing it 100 times? It gets to you.

After I’d gathered all the important data, I went into my crudely made spreadsheet and started drawing links between the data and made it more “consumable” or interesting (averages, percentages, etc.)

Why I did it

You might be wondering why on earth I did this. Surely there’s not that much to gain from spending money and time listening to a bunch of popular tracks?

I decided to do this for a few main reasons:

The plan was to go into this with an open mind, disposing of any assumptions I had beforehand. However, I did have two assumptions that I thought were warranted:

Beyond that, I didn’t know what to expect.

The most popular genres 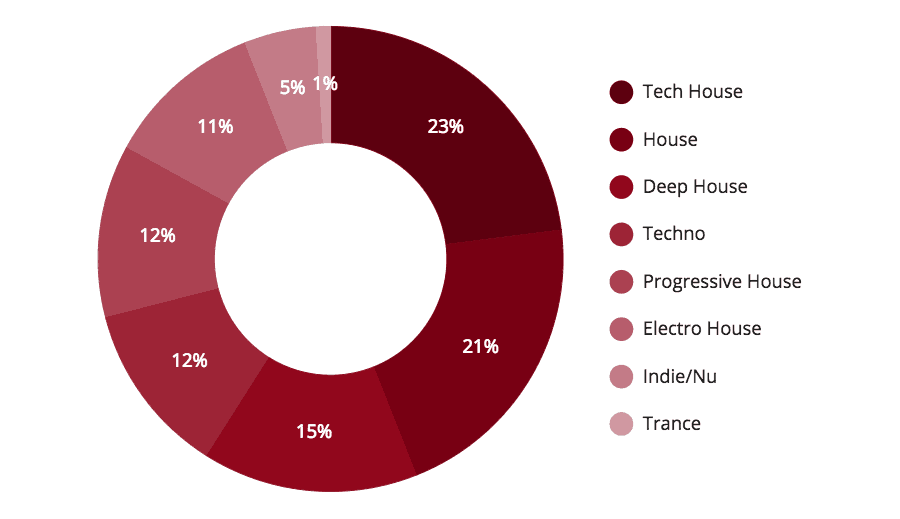 I was, however, surprised at tech house being the most popular genre.

The average length of a track 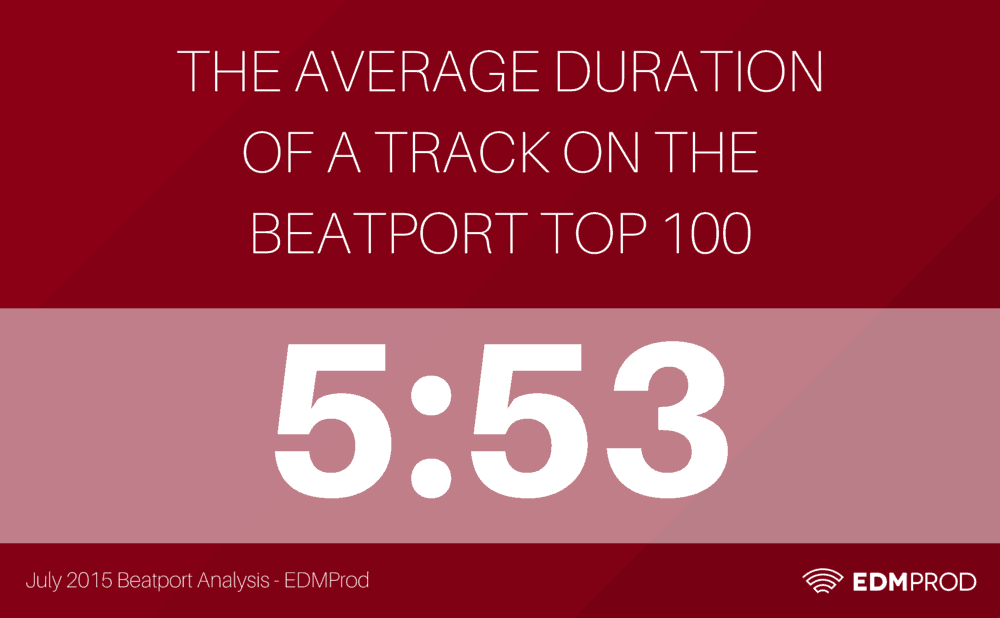 Nothing surprising here, though 5:53 is a little longer than I expected. The longest track was 8:23 and the shortest was 3:33.

Here’s how the length differed between genres:

The most time-consuming part of all of this was studying structure. Analyzing popularity and length aren’t difficult, but to examine the structure of a song is a manual, involved process. However, the structure of a track is also one of the most interesting things to look at, so it’s time well spent.

How I analyzed structure

I knew that I had to keep the structure analysis simple otherwise it’d take far too long to do. I decided to split each track up into segments to get a basic overview of the structure.

Typically when looking at the structure of a song, you’d take into account the intro, pre-chorus, build-up, and so forth. For the sake of simplicity I settled on three categories of song sections:

The 8 most popular structures

There were 17 different structures in total. The two most popular structures were ABAB and BCB. When you consider that a lot of mainstream vocal tracks feature a verse/breakdown after the intro, move into a melodic chorus, and then repeat the verse and chorus again – this isn’t a surprise. The BCB structure is common in genres like Tech House and Techno which often feature a long B section, or “drop” before leading into the main breakdown which builds up to a similar sounding B section again.

The third most common structure was ABCB, which is much closer to the traditional pop structure. Many of the deep house tracks used this structure; they’d start off with a 16-bar or so “verse” section that contained a vocal or sample before featuring a drop. The main breakdown would be different and much longer than the initial A section.

How structure differs between genres

Not all dance music follows the same structure. Obviously a vocal progressive house track is going to be much different to an 8-minute long techno track that doesn’t feature a melody.

Note: I haven’t included trance or indie dance/nu disco due to how few tracks there were in those two genres.

What keys are most popular?

One of my assumptions was that A minor would be the most popular key, and… I was right. We all know A minor is popular, but it’s not the only popular key. Let’s look at the data. 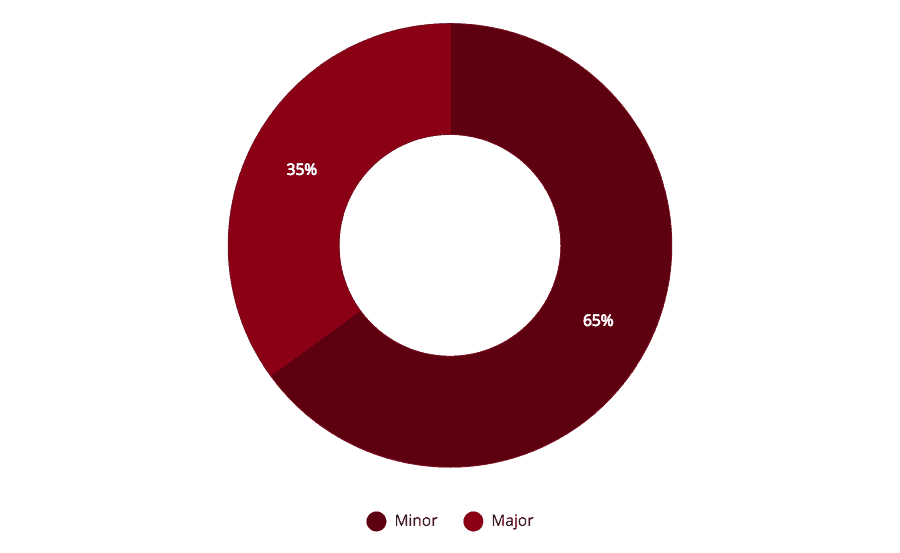 Minor keys have always been more popular in dance music, so this isn’t too surprising. I did expect the percentage to be a bit higher than 65%, though.

The 5 Most Popular Keys 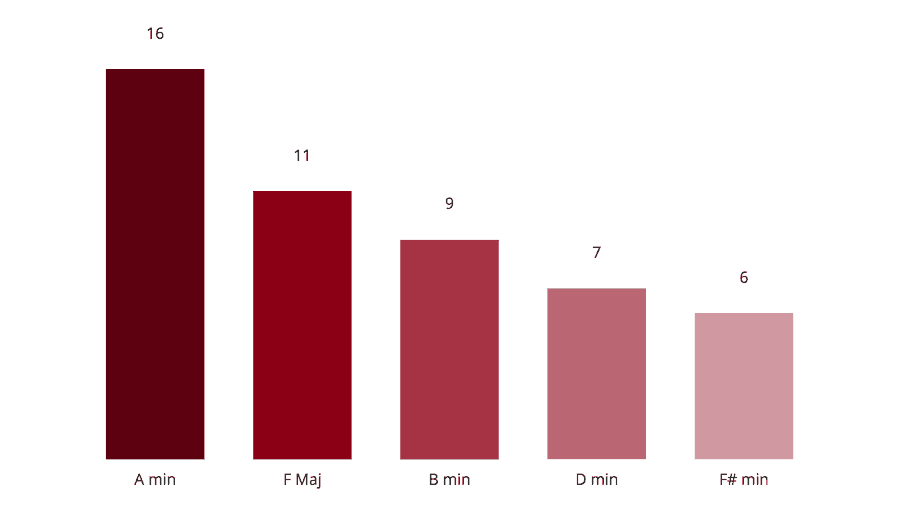 Perhaps the least useful piece of data is BPM. Most of you reading this will already have an idea of what the BPM range is in each genre, but I’ve analyzed it anyway.

Other points of interest

I also added data for a few minor things that I thought would be interesting. I looked at whether a track had sampled another track, how many vocal tracks there were, the percentage of originals compared to remixes, and whether there was melodic content in the intro. Here are the results:

There were a few things I learned from doing this.

First, structure plays a big part in how much impact your track has. I noticed this with techno especially – the tracks that had an A section before the first drop often felt like they had higher energy compared to tracks that dropped straight away after 32 bars.

Second, a track doesn’t need to be complicated to sell well. In fact, the more simple it is, the more likely it is to be received well by the listener. While some of the tracks I downloaded were rather complex, the large majority of them weren’t; but they were well written and structured.

And finally, popular dance music is still evidently diverse in style. People will say that the Beatport Top 100 only contains future house or big room, but that’s obviously false. Yes, some genres simply don’t make it into the top 100, but it’s still diverse.

Hopefully you’ve learned something from this. At the very least, I hope you’ve learned that you don’t need to make something extremely unique in order for people to like it. There’s nothing wrong with making a 122BPM deep house track in A minor that uses an ABAB structure.

I encourage you to study some music for yourself. You don’t need to download the Beatport Top 100, obviously, but why not analyze some tracks in your library? Spend a day or two studying music and you’ll thank yourself down the track.