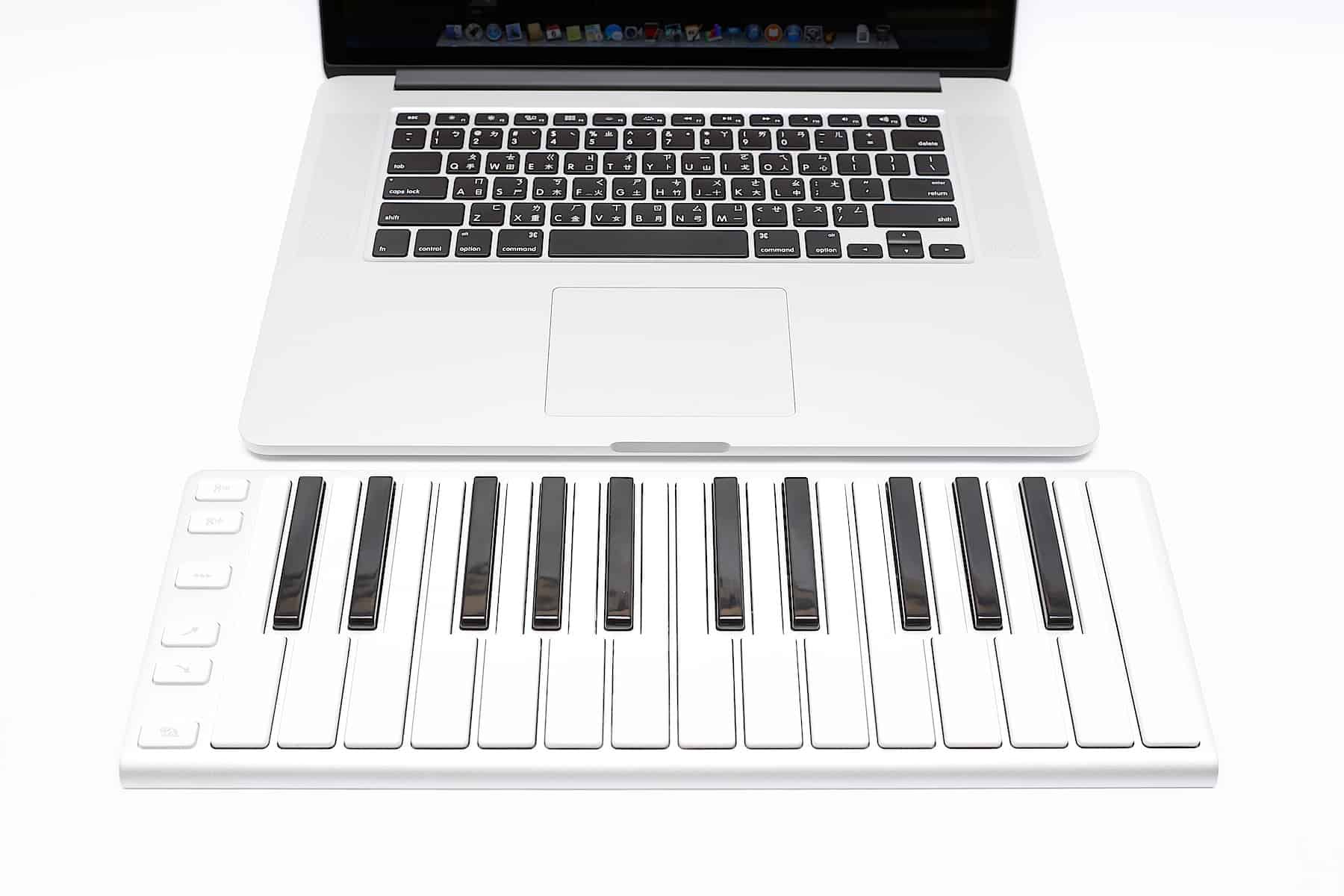 There are very few necessities when it comes to music production. If you’ve got a laptop, a DAW, and some headphones, then you can make decent music.

With that said, there is plenty of gear out there that actually helps us create better music through enhanced workflow and creative input. A MIDI keyboard may not be an essential item when it comes to music production, but it is going to make your production sessions far more enjoyable and creative.

So I settled for the Xkey, partly due to its aesthetic quality and simplistic yet creative functionality. It also matches my laptop (Macbook Pro), design-wise, so that was a good selling point.

The Xkey is a $100 MIDI keyboard. It’s not overly cheap, but it’s not going to feel like you’re playing a $4,000 Roland electric piano either.

In all honesty, I expected the keyboard to do its job, and nothing more. I didn’t care too much for the pitch bend or modulation buttons, or the sustain function. I really only wanted a set of 25 keys to come up with basic ideas on. Put simply, I assumed this product was “just another” MIDI keyboard and that would be that.

After unboxing it and plugging it in, my assumption quite quickly crumbled under what I believe to be one of the best portable MIDI keyboards on the market, and let me explain why.

When I received the Xkey and opened the box, I wasn’t only satisfied, I was impressed. Not only does the Xkey look amazing, it also feels amazing, and it’s not flimsy despite it being one of the thinnest and lightest MIDI keyboards on the market. After playing some chords and riffs, my appreciation for the Xkey only went up.

The second thing that came to mind when playing with the Xkey was that it works exactly as you expect it to. No drivers, no complicated installation, I was up and running within seconds. I didn’t even read the manual! (Let’s be honest though, no one reads the manual these days).

The final thing to note is the size – how portable this device really is. The Xkey wasn’t smaller or larger than I expected, it was just the right size. Any smaller and the keyboard would have been much harder to navigate and use, any larger and it would have been more difficult to transport. At 600 grams, you can comfortably rest the Xkey on your hand and play some quick melodies with your other hand. Mind-blowing.

Key Features – What Stands Out?

As with all the reviews I do on EDMProd, I like to cover the key features of the product. What makes it so special? What can it do?

Despite the Xkey’s minimal layout and size, it’s packed with a range of features. Not too many, but just enough to give you a creative edge when it comes to recording MIDI, performing live, or simply coming up with ideas when composing.

The most important feature by far, on any MIDI keyboard, is the keys. If a keyboard has bad keys, then no number of features will make it a good product.

To be completely honest, I didn’t expect the Xkey to have good keys. After watching videos and looking at photos, I simply concluded that it would feel unnatural and “fake”, so to say, when using it.

I was wrong. I mean, this is no grand piano, but the keys are a lot better than you’d expect from a device this size. The resistance feels natural (surprisingly), and they’re full-sized. They’re nice to the touch, in fact, I’m trying to restrain myself from playing it while writing this review. 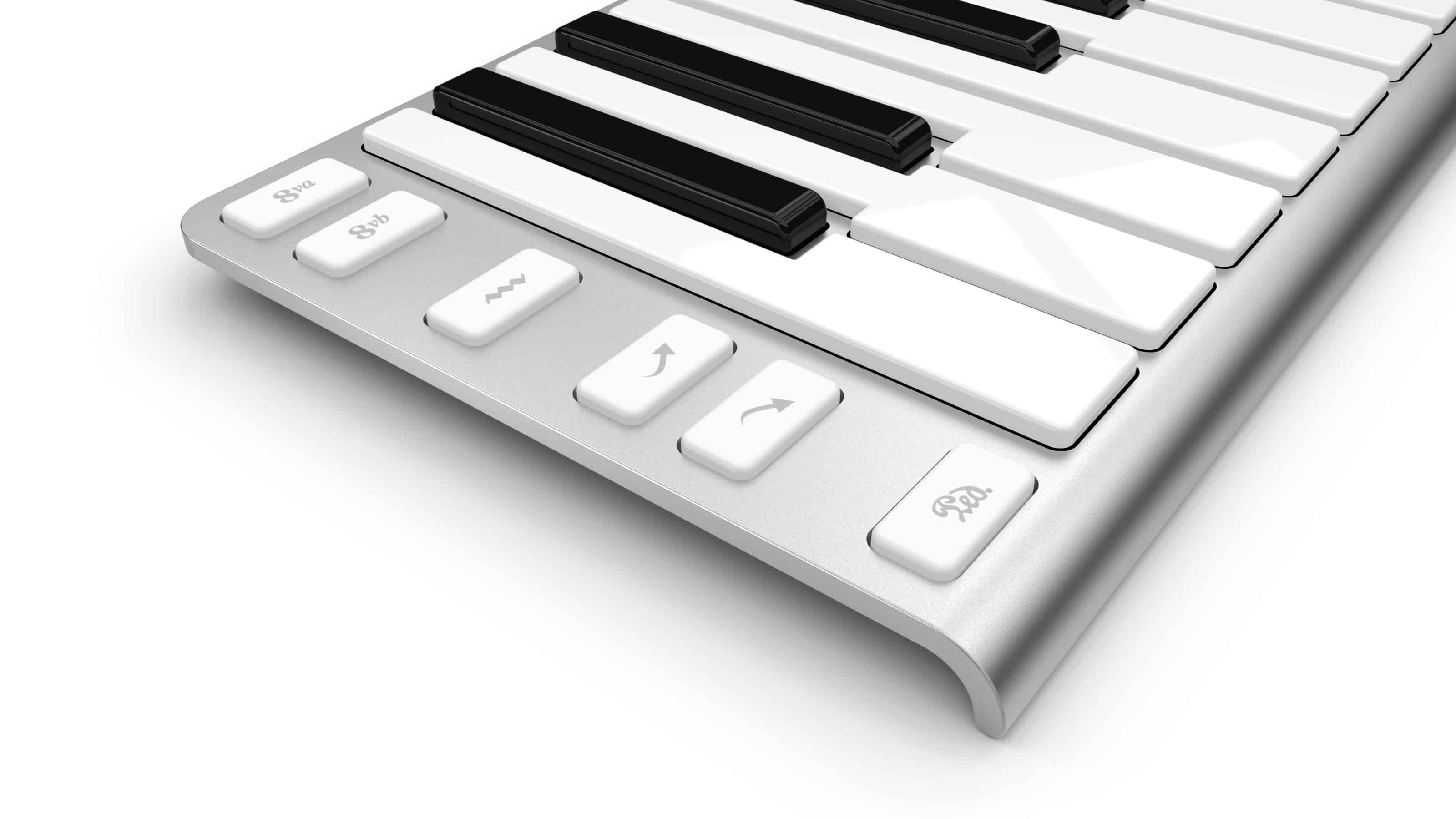 As you can see, the Xkey doesn’t come with any faders, knobs, or pitch-bend and modulation wheels like the large majority of MIDI keyboards have. It’s very minimal in that sense. However, it does have a few function keys on the left side which I’ve found to be more usable than I expected.

One thing that’s always annoyed me about 25 keys is that so many of them have the octave up and down buttons in illogical places. They should be on the left side where they can be easily reached. Why? So you can change the octaves quickly while playing.

The Xkey’s octave up and down buttons are tactile and sensitive. You don’t have to press them hard, meaning it’s less likely for your fingers to slip and miss them. They’re also incredibly easy to reach.

Used in combination with the sustain function (which I’ll get to in a second), the octave up and down keys truly add a new layer of functionality, not only when coming up with ideas in the studio, but also when you need that extra bit of range when playing live.

I didn’t expect much from the modulation and pitchbend buttons, mainly because, well… they’re buttons.

It seems natural to have a pitchbend and modulation wheel, why on earth would you have buttons?

Despite my low expectations, I was actually rather impressed by how well the buttons worked. They’re not a replacement for the classic wheels, but they do offer a quick and easy way to modulate and bend notes. When pushing the buttons down fast, you’ll get an immediate pitch bend (or modulation effect depending on the plugin you’re using it with). The slower you push them down, the less of an effect is applied.

I’m using these a lot more than I planned to. They feel a bit unnatural, but they’re still functional and fun to use.

Initially I thought the sustain button was just one of those “let’s add it in” features. However, it actually comes in handy, especially when used in combination with the octave up and down buttons.

The sustain button basically allows you to keep notes playing after you’ve released your fingers from the keys. For example. I could play a chord with one hand, press and hold the sustain button, and then released my chord-playing hand from the keyboard. If the sound had a long sustain then it would continue to ring.

I found this incredibly helpful when playing pad progressions!

Unfortunately I don’t own an iOS device (I kinda wish I did now), but for those of you who do, you’ll be delighted to know that the Xkey is compatible with any iOS device, making it even more portable than it already is.

You could stick the Xkey in your backpack and play some riffs with your iPhone or iPad while commuting to and from work, you could bust it out at a party and show off, you could pull it out while drivi- you get the idea.

Note: if I ever get an iOS device (which I’m sure I will), I’ll make sure to update this post. 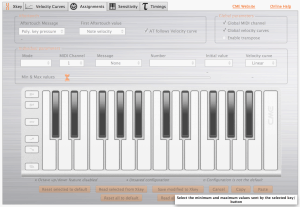 What I didn’t realize until a few days after I received my Xkey is that it has corresponding software that allows you to change a bunch of settings such as velocity curves and key volumes (as well as update firmware).

I initially thought this was only for iOS devices, but it turns out that there’s a download for both Windows and Mac. This kind of customization isn’t available with many other keyboards in this price range, so it’s nice to have.

The Xkey has one up on everyone else here because of how simple it is. The body is made from two pieces, the bottom being plastic and the top casing being brushed aluminium. The keys feel tightly integrated, and the function buttons are tactile and quality.

I get the feeling that I could drop this keyboard a few times and it’d be fine. It’s no Nokia 3310, but it feels like it could take a beating.

Who I’d Recommend It For

If you’re a classically trained composer and expert pianist then the Xkey isn’t going to vibe with you in the studio. It may be nice to take away on holiday, but as a composition tool you’re going to feel limited.

On the other hand, if you’re a hobbyist who doesn’t have extensive piano skills, and you need something quality built at a low price that does what it’s supposed to do, then the Xkey is the perfect choice. I’ve grown very fond of it over the past few days and am certain that it’s going to become a staple in my studio (and backpack).

The ultimate value in the Xkey lies in its size and weight. If you’re someone who produces on the go with a laptop and headphones, then you can’t beat the Xkey. There’s just nothing that stands up to it in terms of quality, functionality, and feeling while being extremely portable. The other 25-key models out there are a quite clunky at times, and can be annoying to take with you when travelling long distances. The Xkey can easily fit in a backpack without causing any trouble.

You can learn more about the Xkey here.